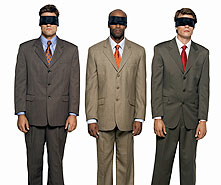 Q: As my grandma used to say, "I'm so low I could crawl under a snake with high hat on." I just got rejected for a new job from an interviewer who I was sure really liked me. This is my third "NO" in a row. Something is obviously wrong here. Could these interviewers be discriminating against me, or am I doing something wrong in the job interview? –Evan, Gilbert, Arizona

A: Have you ever heard the story about the three blind men who were asked to describe an elephant? After taking a moment to touch the animal, they came to very different conclusions about how it must look. The one who explored its trunk said the elephant was long, skinny and flexible. The one feeling its tusk described it as hard, smooth and pointy. And the one who ran his hands over the elephant's hide pictured it as large, rough and wrinkly.

While each of the men correctly described the part of the animal he touched, none pictured the creature as it really was. Yet based upon their observations, each insisted his description was right and the others were wrong. Given the limited information they had and the potential biases they brought with them, their individual perceptions were their reality.

Does this sound familiar? Have you ever left a job interview sure you'd receive a job offer only to never hear from the interviewer again? If so, this shouldn't be too surprising. Any time people get together, there is tremendous potential for misinterpretation and miscommunication because each of us has different experiences and attitudes that affect our understanding of reality.

Unfortunately, this can be particularly true during short job interviews. Because when job seekers work with corporate recruiters the two have little time to get to know each other before deciding to pursue a business relationship, erroneous perceptions often go unchallenged and self-fulfilling prophecies abound. As with the blind men, each party typically has access to only a piece of the entire picture and must make critical assumptions based upon a sketchy understanding of the current situation, past experience and attitudes formed over many years.

Consequently, the baggage that job seekers drag with them when searching for new jobs may automatically lead them to believe the following statements, even when they aren't true:

People who have this chip on their shoulders, even though they are otherwise qualified for the position, often unconsciously sabotage their chances through a hostile or self-pitying attitude.

I once received a comment from a reader with a Ph.D. in computer science who thought he was rejected for a help-desk position because he was in his 50s. While he was competing with younger people who didn't possess his experience or education, help desks don't require Ph.D.s with 20+ years in the job market. He was also bucking the recruiter's assumption that the job was beneath his capability, would bore him, and eventually propel him to look for something more in tune with his expertise.

It's very hard to conduct a successful job search when you assume employers interpret that you don't have a job as a terrible stigma. I recently worked with a client who was humiliated by being laid off by a pharmaceutical company. Even though I told her many times that recruiters understand being unemployed is an unfortunate fact of life these days, she couldn't bring herself to be truthful with potential employers about not having a full-time job (she said she was still consulting for them). Eventually her half-truths created a number of untenable situations where she had to change her story in midstream, taking herself out of the running for several positions she might otherwise have been offered.

This is rarely the case. People hate to give bad references, and they are usually inclined to fairly judge the caliber of someone's work, even if their relationship was more than a little rocky. I once had a client who asked me to check a reference because she was sure it would be scathing. Her former employer returned my call from London to tell me in detail about her outstanding performance and how richly she deserved a glowing recommendation.

If these or other similar thoughts have crossed your mind, closely examine your interview attitudes and techniques. One recruiter may be biased against you for some reason you can't change. That's even possible with two. However, the odds of three employers or more rejecting you for circumstances beyond your control are very slim. Either you are unconsciously coming across as someone who doesn't deserve to be hired, or you're pushing too hard or sounding desperate. These tendencies can be corrected if you are aware of them and determined to change your approach.