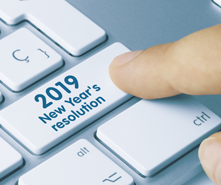 OK, so the concept of the New Year's Resolution might feel cliche. 2019 has just begun, and already reminders surface that the millions of Americans who set resolutions fail to meet them.

It's true that a resolution set on January 1 rarely lasts until December 31. In 2017, Business Insider reported that approximately 80 percent of all New Year's Resolutions failed by February. With that in mind, Forbes offers an interesting spin on the tired cliche of resolutions doomed for failure: Strive for goals instead of resolutions.

If your goals include career advancement skills, or specific improvements in your working life, preparation is key to avoiding the failure common with New Year's Resolutions. Part of preparation is also having clearly defined goals. For example, you may set a goal of wanting to be better at your job — but what does better mean?

That can refer to your knowledge of technological skills, or a less tangible but equally important trait like leadership. The Houston Chronicle pinpointed some of the more common qualities workers across a variety of industries seek to improve.

Other career advancement goals might focus more on end results. CareerCast.com can help.

The steady decline in unemployment for the past six years should lead to salary growth. The seekers' market of the current climate means 2019 is an ideal time to approach your employer about a raise. But the process isn't as simple as marching into her or his office with a demand.

Before arranging a face-to-face meeting to discuss salary, research industry-wide norms for salaries in your field, at your experience level. This will give you an idea of what ballpark to pursue — and, to that end, have a concrete figure in mind when you begin.

Provide examples of improvements you have made in productivity, new skills you have learned, and others you have mastered. It's also important to find the right tone. An employee should not feel as though she or he needs to ask for a raise with hat-in-hand, but no one likes to be threatened, either. An employer given an ultimatum is unlikely to meet an employee's demands, and your search for higher wages may turn into a search for another job.

If you are in fact set on leaving your current employer in 2019, consider writing out exactly what you want from a new employer. The job-search process can be overwhelming, in part because different companies can have entirely different demands and expectations of the same job title.

Know what your qualifications are, what tasks you are willing to take on, and how that aligns with the expectations of the hirer. In that same vein, set a hard line you are seeking for pay and benefits. A position that fails to meet your expectations from the outset is unlikely to change once you're in the role.

Perhaps 2019 is the year you move into a new job. Either your current career is antiquated, or you're burned out, or maybe you just have passions and purpose you had not previously pursued.

The first item to check off your list is to research the field into which you want to move — and not an entire industry, but specific job titles. Pinpoint job qualifications you already have in your prior career or education, and emphasize those once you begin the application and interviewing process. Employers will oftentimes be willing to work with an enthusiastic candidate who excels in one particular phase to get she or he up to speed elsewhere.