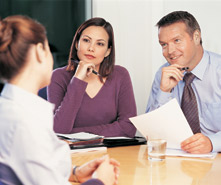 Job interview anxiety is perfectly normal. After all, the interview is one of the major gateways to a new career. Job seekers can alleviate some of their tension by identifying exactly which facet of the interview elevates their blood pressure the most.

We asked Facebook and Twitter users to respond to CareerCast.com’s social media query: Which part of a job interview do you find most challenging? The responses had a unifying theme.

Whether adequately replying to the dreaded “do you have any questions of us?” or understanding which skills pertaining directly to the opening need emphasis, preparation is the universal problem solver. My godfather was a baseball coach who plied his trade in stops at Arizona State University, the University of Nebraska and in the Chicago Cubs minor league system. He had a tried-and-true mantra that was the underlining message behind everything he taught: Prior Preparation Prevents Poor Performance.

Coach’s “Six Ps to Success” – the sixth was dropped to keep things G-rated – meant players take practice seriously. One will perform on game day the same way one practices. The concept is exactly the same for an interviewee as a baseball player.

You can't anticipate precisely what an interviewer plans to ask any more than a shortstop knows exactly how a ground ball will bounce. But practice keeps both sharp and ready to adapt and adjust instantaneously.

Job interview preparation, like any form of practicing, requires repetition. Field questions from a spouse or friend in a simulated interview, but outline questions to ask in response. Create a list of five or six questions to pose in these mock interviews until you have them committed to memory.

Asking more questions is better, because you can't anticipate which the interviewer might cover before reaching that phase of the discussion. There is nothing worse than having three outstanding questions, only to have each covered. Asking a question that restates an earlier point makes you appear to have problems either with listening or comprehension.

Having the right selection of questions comes from the first phase of preparation: research. Whether it’s research into the company’s ongoing practices, or research into trends in the field, this is the fundamental foundation of preparation. The Internet is a great tool to research every aspect available about a company, its history, it's future plans and the specific area of the company where you hope to work.

Conducting research may sound simple enough, but the fundamentals are often the most easily overlooked phase of any preparation. Having more than a cursory knowledge of the position for which you are interviewing is the best way to think on your feet. And never rely on your ability to "think fast on your feet" to replace actual research.

A job interview will never not quicken the heart rate, but preparation is crucial to turn it from anxiety to adrenaline.