The Interview That Will Lose a Job

The Interview That Will Lose a Job 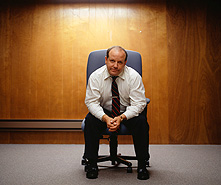 In recent weeks, recruiters for Consolidated Container Co. have seen job candidates arrive up to an hour early for interviews. Other candidates have alluded to financial hardships while in the hot seat, and one person even distributed bound copies of documents describing projects he completed for past employers.

In today's ultra competitive job market, even getting an interview is a feat. Yet recruiters and hiring managers say many unemployed candidates blow the opportunity by appearing desperate or bitter about their situations – often without realizing it.

"People are becoming a lot more aggressive," says Julie Loubaton, director of recruiting and talent management for Atlanta-based Consolidated Container. "They often wind up hurting themselves."

At an interview, you want to stand out for the right reasons. To do so, you'll need to leave your baggage and anxiety at the door. For starters, wait until 10 minutes before your scheduled interview time to announce yourself. Arriving any sooner "shows that you're not respectful of the time the hiring manager put aside for you," says Ms. Loubaton, adding that a candidate who arrived an hour early made workers uncomfortable. "Companies really don't want someone camped out in their lobby."

Signal confidence by offering a firm handshake, adds Wendy Alfus Rothman, president of Wenroth Consulting Inc., an executive coaching firm in New York. Focus your attention on the interviewer. Avoid looking around the room, tapping your fingers, or other nervous movements.

No matter how you're feeling, keep your personal woes out of the job interview process, asserts Ms. Alfus Rothman. Instead, always exude an upbeat attitude. For example, if you were laid off, instead of lamenting the situation, you might say the experience prompted you to reassess your skills, and that's what led you here. "You want to demonstrate resilience in the face of unpredictable obstacles," she says.

Meanwhile, show you've done your homework on the company by explaining how your background and track record relates to its current needs, adds Deborah Markus, founder of Columbus Advisors LLC, an executive-search firm in New York. This is particularly important if the firm is in a different industry than the one you worked in before. To stand out, you'll need to look up more than just basics on company leadership and core businesses. You'll also need to find out – and understand – how recent changes in the marketplace have affected the firm, its competitors and industry overall. Read recent company press releases, annual reports, media coverage and industry blogs, and consult with trusted members of your network. "Companies that may have been performing well just a few months ago might be in survival mode now," says Ms. Markus. "You want to understand how (they're) positioned today."

Also, be sure to show you're a strong fit for the particular position you're seeking, adds Kathy Marsico, senior vice president of human resources at PDI Inc., a Saddle River, N.J., provider of sales and marketing services for pharmaceutical companies. Offer examples of past accomplishments – not just responsibilities you've held – and describe how they're relevant to the opportunity. "You must differentiate yourself like never before," she says. "You need to customize yourself and make yourself memorable."

Sherry R. Brickman, a partner at executive-search firm Martin Partners LLC, says a candidate recently impressed her with this sort of preparation. "He knew the company's product line and what markets it was already in," she says of the man, who was interviewing for an executive post at a midsize industrial manufacturer. "He clearly and effectively explained how he could cut costs, increase sales and expand market share based on what he'd done in his current job." The candidate was hired.

Be careful not to go too far, though, in your quest to stand out. For example, it may be tempting to offer to work temporarily for free or to take a lesser salary than what a job pays. But experts say such bold moves often backfire on candidates. "Employers want value," says Lee Miller, author of "Get More Money on Your Next Job...In Any Economy." "They don't want cheap."

Your best bet is to wait until you're extended a job offer before talking pay. "In a recession, employers are going to be very price sensitive," says Mr. Miller. "The salary you ask for may impact their decision to move forward." Come prepared having researched the average pay range for a position in case you're pressured to name your price, he adds. You might say, for example, that money isn't a primary concern for you and that you're just looking for something fair, suggests Mr. Miller. You can try turning the tables by asking interviewers what the company has budgeted for the position.

In some cases, you may be looking just for a job to get you through so you might consider a less-than-perfect fit. But if you aren't really excited about an opportunity, keep it to yourself, warns David Gaspin, director of human resources at 5W Public Relations in New York. "I've had times where people come in and it's clear that if they really had their preference, they'd be doing something different," he says. "You don't want to put that out on the table. Nobody wants to hire someone who's going to run for the door when times get better."

After an interview, take caution with your follow-up. If you're in the running for multiple jobs at once, make sure to address thank-yous to the right people, career experts advise. Also look closely for spelling and grammatical errors. In a competitive job market, employers have the luxury of choice, and even a minor faux pas can hurt your chances.

If all has gone well, don't stalk the interviewer. Wait at least a week before checking on your candidacy, adds Jose Tamez, managing partner at Austin-Michael LP, an executive-search firm in Golden, Colo. Call recruiters only at their office, even if their business card lists a home or cell number. Leave a message if you get voicemail. These days, recruiters typically have caller ID and can tell if you've tried reaching them multiple times without leaving a voicemail. "There's a fine line between enthusiasm and over-enthusiasm," he says.