How to Handle 12 Challenges Speakers Face

How to Handle 12 Challenges Speakers Face 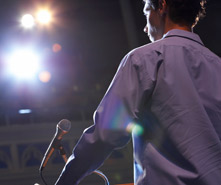 It’s been said that fear of dying is almost as powerful as fear of speaking in public. In fact, the two are closely entwined. Haven’t we heard the phase: “He’s dying out there” in reference to someone appearing before an audience?

Death and bombing in public share similar attributes when it comes to fear. That’s why I make it number one out of 12 challenges that I discuss in my book, The Fast Track Guide to Speaking in Public, and are now sharing with you in brief in this blog. (For a more extensive discussion, however, I refer you to my book, which is available in hardcover, paperback, and e-book formats.)

Challenge #1 You are deathly afraid to speak.

You can’t do anything about death, it’s inevitable, but you can face your fear of speaking and, through some concrete effort on your part, you might even find yourself enjoying it. When I say effort I mean prepare. Practice so you know what you’re going to say, and remember this: the more you do it, the less fearful it becomes.

Challenge #2: Someone walks out.

It happens. Don't take this personally because chances are it has nothing to do with you. He or she may have to use the bathroom, or just received a text they need to react to. They may even leave because what you're talking about isn't something they want or need to hear. This still has nothing to do with you. So ignore them, let them go, and keep talking to those who have remained to hear your words of wisdom. Ignore it unless everyone walks out and then you should probably leave too; there may be a fire.

Challenge #3: You get booed.

Even the president and the first lady have been booed and it doesn’t stop them from speaking again. Imagine yourself getting booed and surviving the experience. You’ll be a stronger speaker because of seeing yourself as a survivor even if it never happens to you.

Also, like most “mishaps” or unpleasant situations related to speaking, if you do get booed, it’s best to figure out why it’s happening (or afterwards, when you reflect on your speech, and analyze what worked and didn’t work about it, why it happened). That might help you to see if there’s something you said that touched off that reaction that you might reconsider putting in your speech again or, if it’s pivotal to your speech, just accept that you may get booed again.

Challenge #4: Someone keeps interrupting you.

This happens but you can deal with it in a non-confrontational manner, that still gets the point across that such behavior is unacceptable.

Make sure you have notes and a backup plan if your computer and/or Power Point presentation doesn’t work. Don’t just rely on technology because technology may fail.

Challenge #6: The audience doesn’t want to hear the prepared topic.

If possible, adapt to what this particular audience does want to hear.

If not, try to make what you’re speaking about more interactional so you find out just what’s going on with your audience that’s causing them to resist your topic. Within reason, be flexible about your content if you’re getting such strong vibes from your audience that you’re off base on what their expectations were.

Challenge #7: You forget what you were about to say or you can’t remember a fact.

It happens to the best of us. Take a deep breath, regain your composure, and either change the subject, or if it’s obvious, ask the audience for help without being too self-deprecating about what happened.

Challenge #8: The person that preceded you covered your topic.

That’s why it’s always a good idea to know who is going on before you and what he or she is likely to say, or at least his or her topic. Have a secondary speech available to give or at least make sure if you find yourself giving a similar speech that at least you include your own examples and “spin” on it so you don’t bore the audience.

Challenge #9: You run out of things to say.

Turn to the audience for their input. After all, this doesn’t have to be a one-way exchange just because you’re giving a speech. Ask questions.

Divide the room up into small groups and have them do an exercise for five minutes, reporting back to the group when they’re done. Or have everyone turn to the person next to them and interact for 5-10 minutes. Alternatively, if you’re close to the end of your allotted time, consider ending early.

Challenge #10: You’re out of time with more to say.

Finishing on time is considered the sign of a professional. (If there’s a speaker after you, it’s also courteous since going past your time will cut into that next speaker’s time.) Pull your speech together quickly and finish up with a distinctive ending rather than just going on and on because you still have things to say. It’s the quality of the speech you deliver that will impress your audience, not its length.

But you’re a professional. Psyche yourself up. You made a commitment. People are coming to hear you. Remind yourself that it’s just one more speech; you can get through it. Then give the speech you’d like to hear.

Challenge #12: How to stay fresh when you give the same speech again and again to different audiences.

Remember that just because you’ve given the same speech before, this audience hasn’t heard it. So to them it’s fresh. You can also add new anecdotes or revive the information so you and your speech are considered “cutting edge” or at least up to date.

By preparing what you are going to say, practicing it, preferably saying it out loud at least once, plus having the added confidence that you’ll get by facing, and learning new coping strategies, for dealing with these twelve speaker challenges, you might even enjoy, rather than dread, the next speech that you have to deliver.

Jan Yager is an author and a professional speaker who delivers keynote addresses and workshops throughout the U.S. and internationally related to her key areas of expertise including time management, work relationships, getting published, foreign rights, and friendship. To contact Jan, write to: jyager@aol.com or visit her website: drjanyager.com.