How to Beat Your Procrastination Problem

How to Beat Your Procrastination Problem 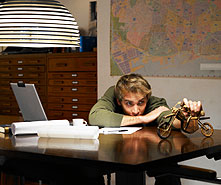 Ah, the joys of procrastination. It always feels better to do tomorrow what you probably should be doing today. Yet, when we procrastinate, the guilt trip most of us feel often outweighs the short-term gain of free time. So what’s the solution? Read on (assuming you don’t decide to read this column later, you procrastinator).

We’re all guilty of procrastinating on occasion, especially at the office, particularly when we dislike or feel overwhelmed by a task at hand. And the penalties you’ll suffer for procrastination can be minimal or simply annoying, such as having to pay extra interest on an overdue bill. However, habitual procrastinators can pay a far bigger price, including intense anxiety and self-disgust, and their behavior can keep them from meeting their potential and may eventually cost them their job.

If your to-do list continues to grow longer, the first step is to identify the types of projects or situations that keep you from moving ahead. If you can't pinpoint an exact cause, or if you find procrastination difficult to overcome, psychological issues may be involved. Most often, career advisers say that procrastination represents a form of fear. It's a symptom of anticipating critical judgment or a perceived threat.

The most prevalent is the fear of failure. Failure-fearers usually avoid important projects and busy themselves with routine, familiar tasks. When something important is at stake, they have trouble concentrating, voice all kinds of excuses or complain about obstacles that stand in the way. They tend to overestimate the difficulties involved and underestimate their own abilities to resolve them. As a result they vacillate, delay or give only a half-hearted effort.

Perfectionism also is a cause of procrastination. Many perfectionists put off tasks because they fear failure, but in contrast to failure-fearers, they set exceedingly high standards and overambitious goals. Aiming too low would be tantamount to being judged just average or mediocre. Another aspect of perfectionism is the misplaced attempt to do everything perfectly, regardless of its importance. They approach even trivial matters so thoroughly that they miss important deadlines. Perfectionists can't set priorities or determine which tasks require minimum or maximum effort.

A typical perfectionist might be asked by his boss to prepare a brief review of a new business opportunity. Instead, he produces an exhaustive, meticulously researched 30-page study. Rather than being commended for his work, he gets reprimanded for going overboard and not spending more time on higher priority projects.

If you have a tendency to put a massive effort into every task whether they deserve it or not, ask yourself these questions:

One other reason for procrastination may be a fear of success. While people who have a fear of failure prefer to retreat by procrastinating endlessly, success-fearers welcome challenging assignments. But as soon as they've made any significant progress, they feel compelled to check themselves and seek ways of postponing additional work. If this sounds familiar, you’ve probably become quite cunning and elaborate in the excuses you use to avoid ending any project, say career advisors.

Understanding why you procrastinate is helpful, but that alone isn't enough to overcome the problem. You must have a strong desire to rescue yourself and be willing to get tough if necessary.

There are a number of ways for you to attempt to overcome your need to procrastinate, career counselors say. The key is to choose only those techniques that seem to work best for you and be diligent in applying them. The point isn't only to be aware of alternative methods, but to find more efficient ways of handling the projects that get put off until the next day. Chances are that applying just a few of the following ideas will release your energies for action.

Delay gratification. M. Scott Peck, the psychiatrist and author, suggests delaying gratification by experiencing the pain first and getting it over with. He reached this conclusion after working for several months with a 30-year-old financial analyst who was locked into a cycle of procrastination on her job. Dr. Peck and his client analyzed her attitudes toward her parents, job, boss, her own abilities and her possible fear of success, but nothing helped. Finally, he asked her, "Do you like cake?" She replied that she did.

"What part of the cake do you like better, the cake or the frosting?"

"And how do you eat a piece of cake?"

"I eat the frosting first, of course."

Having gained this insight, Dr. Peck started probing her work habits. Invariably she would devote the first hour or so of each day to the most gratifying and easiest of her tasks, and the remaining six hours getting around to – but never quite accomplishing – the tougher assignments.

Dr. Peck suggested she force herself to do the objectionable tasks during the first two hours each day, then enjoy the remaining time. She acted on his advice and no longer procrastinates.

As a first step, list as many specific tasks as you can. Next, organize the tasks and establish an action plan. Third, set deadlines for tasks and draw up a master list – a continuous, single listing of everything that must be done. The tasks are then transferred each day to your daily list of things to do.

Breaking the project into pieces and taking it on in small doses lessens the drudgery. Some people allow as many sessions as it takes to complete the job, but they limit each to just one hour. Sitting down to a well-defined work interval helps, since you know that there's an end in sight. Open-ended sessions, on the other hand, usually magnify the scope of the project and can leave you feeling discouraged.

Just do something. If you're having trouble getting started, make an opening move of any kind. For example, if you can't decide whether to break your report into several parts, move ahead as though it’s one big project. You’ll soon discover if your approach is right, and if not, you can make the necessary changes.

Create small victories. Starting a project that can't be completed for weeks or months can be exceedingly difficult. Motivate yourself to start by creating mileposts along the way, and then reward yourself each time you reach one. The rewards can be simple, such as a 20-minute break to surf the Net, or more satisfying, such as a weekend trip or a day off.

Penalize yourself. If you aren’t making the progress you’d like on a project, make yourself pay a price, such as missing a favorite TV show or skipping dessert. Also, ask your spouse, a friend or colleague to remind you of a task at certain intervals, and have them pester you (if they don’t mind) until you've done it.

The Swiss-cheese method. When faced with an overwhelming or complex project, most people think they have to commit a big block of time before they tackle it. Since big blocks of time are rare, they put the project off until pressure from a deadline makes them finally dive in. Instead, career counselors suggest turning a huge project into Swiss cheese by poking holes in it. Think of several easy tasks that can be done in 10 minutes or less. If, for example, the project is writing a report, try organizing the necessary data, making a phone call to gather more information or meeting with a colleague.

If the project still seems overwhelming, continue with the small tasks. After several sessions, you’ll have a better idea of how much time the project will take. This will help you schedule enough blocks of time to complete it before the deadline.

Divide large tasks. This means choosing tasks that will fill the time available. For example, if you have a three-hour time slot, tackle one big task rather than several smaller jobs. Sometimes the only time available is before or after work or on weekends, so you might consider spending an hour or two early on a Saturday or Sunday morning before other responsibilities take over.

Delegate. When faced with a routine or unpleasant task, it’s sometimes possible to assign the project – or parts of it – to someone else. There also are many outside services that can be hired to do time-consuming, routine work. Some people swap tasks they dislike with a colleague who doesn't mind them, and then you do for the colleague tasks he doesn’t like. Ask yourself, "Is it more important that I do this job, or that it gets done?"

Once you learn how to overcome procrastination, career counselors agree that you’ll likely find that you have more time available for all of the things in life you enjoy – and didn’t have time for before because you wasted it worrying about the next big project.