How to Ace a Mealtime Job Interview

How to Ace a Mealtime Job Interview 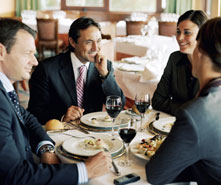 The Situation: Tom Miller sat looking at the email he'd received from a Fortune 1000 company who was interested in hiring him to be their CIO. After a successful job interview, the company's executive team invited him, his wife and daughter to spend a long weekend in Dallas. The trip would give Tom a chance to become better acquainted with the company's management, their families and homes, as well as help his wife get to know the city.

Tom had mixed feelings about the trip. He was enthusiastic about the company and the position, but he wasn't too excited about having so much business conversation over food, especially with his wife and daughter. He was used to talking regularly with top executives in his company, but was definitely more comfortable working in a conference room than a fancy restaurant.

The Why: At some point during a job search, you may also have gotten an invitation like this from an employer. With so many qualified candidates looking for work, today companies want to get to know potential employees thoroughly before extending them a job offer. They also need to be sure the candidate will be happy in a new home before paying for them to relocate.

Interviewing over breakfast, lunch, dinner or a weekend barbecue is a good way to talk business in a relaxed atmosphere, while keeping an eye on a job seeker's social skills at the same time. You can tell a lot about a person by the way they eat.

Of course, humans have been eating their way to lasting relationships since they started gathering in tribes. Breaking bread together has been the catalyst for signing treaties, sealing deals, starting businesses, and solidifying teams for thousands of years. As the social lubricant that greases the wheels of commerce, it is often during a meal that you find out if you've landed the contract, gotten the job or scored the promotion. Because of this, every employee who wants to succeed needs to learn how to handle a power lunch, or they simply won't be players in the economic game.

Aside from increasing camaraderie, there are two other major reasons to meet over a meal. If you're doing a lunch or dinner job interview, you'll be evaluated on how you handle yourself in a social situation by your potential managers or colleagues. This is also true for your family. Many jobs require entertaining or deal-making away from the office, and being a good negotiator isn't enough if you don't know how to act in a social setting.

Often your spouse will also play a role in entertaining clients, or accompany you to conventions or large corporate meetings. Management wants to see that they will be active in supporting your career and can hold their own in conversation for several hours over dinner. Children, of course, aren't judged the same way, although some companies do link raising well-behaved children with building an effective team. If you think this thinly-veiled excuse for running you and your family through a social gauntlet is inappropriate, look for work that doesn't require socializing as part of the job. But be prepared to severely limit your choices.

The other major issue decided during a lunch or dinner interview is whether you and a potential employer are a good match. Remember that employment, not the best steak in town, is the real reason that you're meeting. Before you head for the restaurant, think about the questions you need to ask and the achievements you want to cover, just like you would for a conventional job interview.

There is one additional issue with mealtime interviews you need to watch out for -- if you get along really well with your interviewer, sometimes your conversation will wander too far from its original purpose. If this happens, referring to your pre-determined agenda will help you and your companion do the work you both intended, and by the time you're ordering coffee you will have decided if you want to frequent Arturo's Pizza again, this time as the new CIO for Acme, Inc.

Please ignore the previous paragraph if a non-American asks you to dine with him. Executives from many other countries feel that talking business during a meal is uncivilized. With a citizen of the world, it's wise to confine your conversation to more general subjects unless you want to be labeled "an ugly American."