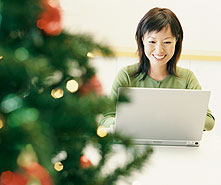 David Walker saw the holidays approaching last year with high anxiety. He'd lost his marketing job in early October, and with unemployment on the rise and fierce competition for open positions, he was afraid he wouldn't be able to get any new job interviews until the New Year. But rather than take time off between Thanksgiving and New Year's, when company recruiters (like everyone else) typically slow down their hiring efforts, he ramped up his search. And it paid off: he accepted a job offer a week before Christmas.

The secret to success for David (not his real name) was his willingness to go all out on his job search in the weeks before – and even during – the holiday season. Although he wasn't exactly looking forward to the prospect of interviewing with potential managers and peers eager to head out to company holiday parties, he also knew that he would have a unique opportunity to stand out from the majority job seekers who put off their job hunting plans until the New Year.

But if the holidays are such a great time to find work, why don't more job seekers take advantage? Success during this time of year requires a special set of skills – career advisers agree that workers who can persevere, shake off seasonal blues (as well as recession worries) and quickly change tactics to meet new situations often have better luck during the holidays than at other times of the year.

To help stay motivated, job seekers need to remember that the common perception that hiring falls off during the holidays is a myth, says Doug Richardson, a Philadelphia career counselor. Candidates who buy into that belief remove themselves from the job market, needlessly passing up hundreds of good employment opportunities. On the other hand, if a large number of candidates make that assumption, it also opens up more opportunities for those who don't.

"By doubling your efforts over the holidays, at a time when many other unemployed workers are focused on activities other than job hunting, you increase your odds of finding a new position," says Mr. Richardson.

To help you stay motivated and amp up your job search over the rest of the year, remember these five reasons why actively looking for work during the holidays can pay off:

Not only do many unemployed candidates stop searching for jobs over the holidays, but those with jobs who are considering a career change usually stay put into the New Year to make sure they receive bonuses and vacation time they've accrued throughout the year. "Even more reason to try to beat out other candidates who are waiting for January to start their searches," says Mr. Richardson.

Hiring decision makers are less likely to be traveling as the holidays approach. Instead, they're focused on finishing projects, cleaning out files, meeting with colleagues and attending holiday gatherings, say career advisers.

Everyone is a little happier at the holidays, so leverage that good will to your advantage when trying to schedule interviews. Keep your networking up – contacts are often more available and willing to meet as work demands slow down, helping turn short discussions into long-term opportunities.

People who start work early in the New Year had to interview for that job in November or December, not in January. And for companies that review their staffing needs in January each year, you'll have a head start in case a need arises quickly.

The New Year is full of reminders to start fresh, turn over a new leaf and set new career goals. Beat all of those to the punch by maintaining your job search through the holidays, and you'll be on board by the time others are making their first calls.