Helping Society Without Quitting Your Job

Helping Society Without Quitting Your Job 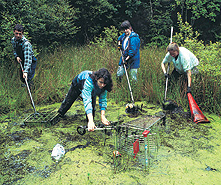 Doing well by doing good is a goal aspired to by many socially conscious people. But those who act on this goal are truly unique. "As I neared 40, I realized there's more to life than the next raise and promotion," says Greg Thompson, an IBM Corp. project manager in Atlanta. So Mr. Thompson started volunteering with the Fellowship of Christian Athletes (FCA), and has since helped stage annual fund-raising breakfasts for 6000 people and a drug-education program.

"I joined IBM to develop new skills, and now I'm using them and others I'm learning to make a difference in my community," he says. While it may have meant fielding FCA phone calls at the office and leaving work early on occasion, "IBM is supportive of volunteer activities, so everyone wins."

If you're ready to contribute but aren't sure how to enlist your employer's support, start by reviewing your personal interests, "then match them to a project your company would likely embrace," suggests Wendy Smith, an environmental activist in New Hampshire whose resume reads like a who's who of nonprofit agencies.

She cites the building of a playground in a distressed neighborhood and the creation of local recycling programs as great examples of projects that were spearheaded by private-sector employees eager to help their communities, but lacking the clout to pull them off alone. In each case, their companies either allocated funds for the projects or allowed them to organize co-workers into volunteer groups.

"Once they showed the financial rationale of their projects and how they would boost their companies' community standings, they got the support the needed," Says Ms. Smith.

New England is home to several companies noted for their willingness to offer financial or organizational assistance to socially conscious employees, including Ben & Jerry's Homemade Inc. in Waterbury, Vermont and L.L. Bean Inc. in Freeport, Maine. But no matter where your employer is located, with the right approach, you can convince senior management to support your cause, says Ms. Smith.

Begin by following the chain of command. "Ask for permission from your boss to send a memo around the company that outlines the project and requests volunteer help," she says. To appease worried superiors, stress that all activities will take place initially after work and on weekends.

"This is especially important at small companies, where they can least afford anyone taking time off," says Ms. Smith. Once the cause is established, "it's tough for small-company owners to object to your volunteerism, especially when they see how it can boost morale and the company's image to outsiders."

Next, organize a meeting for all who respond, and be ready to offer a variety of projects to choose from, such as donating blood at a local hospital, cleaning up trash-filled lots or driving senior citizens to medical appointments.

After a project or two, work with your employer's public-relations office to garner publicity for the good deeds, and success will feed upon itself. Soon, says Ms. Smith, other companies will call asking advice on starting similar volunteer programs. You'll end of serving the community as effectively as many nonprofit groups, with the fringe benefit of gaining positive attention for yourself and your company. But don't let it go to your head: you'll likely be disappointed if you expect your volunteer efforts to lead to a promotion. On the other hand, developing new skills often pays off at salary review time.

"The nonprofit sector doesn't have a monopoly on socially impactful work. It's what you do wherever you are, not just where you're employed, that determines your ability to contribute," says James P. Clark, an advocate of volunteerism.

To be sure, working full time in the nonprofit sector remains the most direct way to help society, but Mr. Clark says a variety of executives find the same level of fulfillment by getting their employer's permission to run for local office, serve on a commission or spend a few days each month teaching kids in an inner-city school.

"These options seem to appeal most to women who finally had a chance to rise in their companies, but became disillusioned by what they found at the top," he says. Once they realize they don't have to abandon their careers to develop new skills and fulfill social responsibilities, "they're inspired to do both," he says.

While part-time volunteering is a perfect outlet for some well-meaning careerists, it leaves others searching for more. "I was president of several nonprofit boards, and I raised money for each group, but it just didn't put out the fire," says a Kansas City, Missouri attorney who resigned his law-firm partnership to raise funds for a local nonprofit group of psychological counselors.

"Even though my firm supported me completely, I wasn't making enough inroads toward remedying society's illnesses," he explains. "So I decided to make the change from doing greed to doing good full time."