Help! My New Boss is Just a Kid

Help! My New Boss is Just a Kid 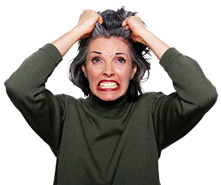 Dear Guru Don: I am about to pull my hair out! My company just hired a kid to supervise me, and it's a disaster. I run a major warehouse system for a utility company. I'd been told for five years that I was next in line for promotion, and when it came up, wham, out of nowhere they hire this kid with a master's degree in logistics. What she doesn't know would fill a book. I had to train her, and I'm at least ten years her senior. She's a whiz on computers, but so what? She doesn't know a lift bucket from a stapler! I was told I'm indispensable, but then my boss didn't back me for the promotion. Plus, she put contemporary soft rock on our building PA, all John Mayer-type stuff, and I'm all about classic rock and retro-punk. The crew was working harder to a faster beat, no question. Help! What do I do?–Passed Over Pete

Dear POP: Wow! You have a bundle of issues going on here, Mr. I've-been-waiting-my-turn. First of all, I'm guessing you're a bit more than ten years her senior, but let's say I take you at your word. So she's somewhere around 30 and you're at least a tad over 40, and in any case you've about had it.

I just wrote a whole book on why people get promoted, and your case is a classic. Loyalty doesn't count anymore. I hate to be blunt but, as my mother laments, it's way too late now: Your employer passed you over because your skill set was not up to the task.

You're probably a great guy for being in charge of the warehouses – indispensable, as your old supervisor said – but supply chain management has gone through an explosion of innovation in recent years. Your new boss has an entirely different approach to managing inventory. She's not about counting things. She's trained in methods to put inventory production and carry expense off onto suppliers, and how to find and vet global sources for your lift buckets and staplers. If she has a new master's degree in logistics, she even knows which Chinese holidays will disrupt delivery schedules. You say she's a whiz on computers, and here's why that's really valuable: If your employer can cut 5% from their $100 million inventory, they save $5 million. She can do that, and you can't.

Also, anytime I hear the words "indispensable" or "irreplaceable," I cringe. Think about it. If you're indispensable, you can't be promoted. Smart careerists know they have to document their job and train a lieutenant or replacement so they can move on. Do you have someone in mind who could take over your job today? People who plan on getting promoted do have that person developed and ready to go.

Here's a subtle point: Any promotion creates two staffing changes, while hiring from the outside creates only one. If you have someone ready to replace you, you smooth out the process and reduce that risk factor in the eyes of senior management.

So what do you do about your situation? What fascinates me about your email is that you didn't say one word about her being a woman in charge of a traditionally male arena (supply chain/transportation/warehousing/logistics). That indicates to me that there are plenty of women in management above you, in your crews in the warehouses, and so on. Your complaint was that she was a kid with bad musical taste, not that she was a woman. This is good, because it means there's hope for you!

You're on the vanguard of a trend: older workers working for younger bosses. Before you retire, this will become the rule rather than the exception, so you have to figure this out or go home and start watching TV all day. It seems clear to me that businesses are going to solve this riddle just as they have solved the diversity riddle. In the same way that a company won't allow a worker to complain about working for a black boss, or an Asian boss, or a lesbian boss, companies are about to enforce a no-complaining-about-working-for-a-younger-boss rule. So stop whining before they decide to replace you with somebody younger.

You have two options: Get over your resentment and discover how to work for your younger boss, or go get her education so you can have a job like hers.

If you decide to get her education, check out accelerated MBA programs like the one at the University of Tennessee-Knoxville. In just 17 months, you can be back in the job market with much higher prospects for being promoted in your field. You might start by asking her where she got her degree and what she studied.

As to getting along with her, you have a better chance than you might think. You may have had to show her what a lift bucket is, but maybe she could show you a thing or two as well. Try asking her to train you in her position, so she can get promoted some day. Learn to do the analytics that make her worth her salary many times over. Become an effective bridge between her and the warehouse crews. Serve as her valuable lieutenant. But try not to ever be indispensable again. It's holding you back.

As to the music thing, explain that the crews worked harder to the old mix. If she's 30 she's got an iPod to program all-John Mayer-all-the-time if she wants. If that doesn't work out, get your own iPod.

Got a career emergency? Send it to don@donaldasher.com, and watch this space for Asher's response.

Donald Asher is a nationally known writer and speaker on careers and higher education.
He is the author of ten books, including the just-released Who Gets Promoted, Who Doesn't,
and Why; How to Get Any Job with Any Major; Graduate Admissions Essays; Asher's Bible of
Executive Resumes; Cool Colleges for the Hyper-Intelligent, Self-Directed, Late Blooming,
and Just Plain Different; all by Ten Speed Press. Asher speaks 100+ days a year from coast
to coast to college and corporate audiences. This column originally appeared in another form
in USAirways magazine.