Help! My Boss Has a Workplace Crush

Help! My Boss Has a Workplace Crush 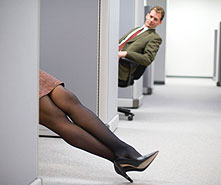 Dear Guru Don: My boss is making me work for a complete idiot, and I think she's gone bonzo herself. I am a paralegal in the corporate legal department of a major company based in Chicago. It's a great department, or at least it was. My boss made general counsel about a year ago. We were all excited because she was the first woman general counsel. But then she developed a crush on this young attorney we all secretly call "The Blond Bimbo." Let's call him Bobbie. He's cute, I'll admit, in fact, he's movie star good looking. But he failed the bar exam several times, if you know what I'm saying here.

She gets all flush if he comes into a room, and her eyes light up like Christmas. She talks about him all the time. You can't bring up any topic without her bringing the conversation around to him. "The weather is nice," you might say, and she'll say, "I wonder if Bobbie is going to play tennis today." And by the way, she's practically old enough to be his mother. It's so embarrassing! She thinks no one is noticing, but of course it's the talk of the department. Some of us believe they should just go on and have sex and get it over with. Maybe that would cure her. They're both single, so who cares?

Of course he does nothing to discourage her attention and favors. She's teaching him very bad habits, like that it's okay to come to work late if he feels like it, or it's okay to go drinking after work with the team and leave without paying for his drinks! If she was going to take him under her wing, at least she should teach him how to act like a professional. He needs the guidance, believe me.

Here's my biggest problem. She's making me give him my work to review, and I've been in my job for 15 years. I've forgotten more than he'll ever know. She wants him to "get some supervisory experience." I could just puke! I do some work for another attorney, but he's not the general counsel. I want to know how to get my boss back. We had a good relationship until she fell for this boy. I helped her get where she is, and now I get treated like this? We're all so embarrassed that she is making women look bad. What do I do? –Didn't Ask to Be Under the Bimbo

Dear Didn't Ask: Interesting problem! Obviously, you're not the one who should be under the Bimbo. This volcano needs a chance to blow and, as you have suggested, that might cure the whole problem.

I'm inferring that you belong to what my wife calls "the support mafia." In addition to a formal org chart, every organization has an informal executive network (the contemporary version of the good ol' boys network) and a completely separate system for support staff. These invisible networks of information and power control a lot of what goes on in most organizations. I'm guessing that when you say "we're all embarrassed," you mean "we women paralegals and admin staff who actually run this legal department in spite of what the org chart says" are all embarrassed.

So who books travel for the department? If you manage it right, you or your compatriots can probably send them off together to a settlement conference or something, with no one the wiser. They'll either consummate this obsession, or with prolonged exposure she'll learn he's half as bright as she is. You win either way.

By the way, you don't think men have a corner on the stupidity market, do you? Women have every right to be stupid at work, too. They have every prerogative to fall in love with inappropriate colleagues, to embezzle and steal from the company, to manipulate the system for personal advantage, and to favor their cronies. This doesn't reflect badly on women; it reflects badly on them as individuals. A man doesn't cringe when he hears about another man acting badly, and neither should any woman. So get over this double standard and you'll have more fun experiencing the joys of Schadenfreude in the workplace.

I once had a person on my work team who was in love all the time with men who didn't even know it. She was the female version of a stalker. Some guy would talk to her on the elevator, and she would go all aflutter. She would snoop around and find out everything about him. She would arrange to bump into him coming and going, try to find out where he got his coffee in the morning, where he waited for a train home, that sort of thing. And we all had to hear about it for weeks as if they were having a relationship, when there was nothing to it but her imagination. Eventually she would give up, because it would slowly dawn on her that he was not acting like a boyfriend after all. The weird thing was that she was gorgeous. That's just life among the crazies at work. None of us ask for this type of colleague, but we all have to get our assignments done anyway.

So what do you do about your central complaint about Mr. Bimbo, which is that he's reviewing your work? I think you have four choices:

You're obviously bright and talented. Once you join the executive network, you can start worrying about what manipulations the support mafia is planning for you!

My strong prediction is that you're not going to succeed with any appeal to the general counsel, who is blind to her own obsession, or to the Bimbo, because he is, well, a bimbo. I'd start by putting them together on an out-of-town trip. You might get lucky if they get lucky, if you know what I mean.

Got a career emergency? Send it to don@donaldasher.com, and watch this space for Asher's response.

Donald Asher is a nationally known writer and speaker on careers and higher education. He is the author of ten books, including the just-released Who Gets Promoted, Who Doesn't, and Why; How to Get Any Job with Any Major; Graduate Admissions Essays; Asher's Bible of Executive Resumes; Cool Colleges for the Hyper-Intelligent, Self-Directed, Late Blooming, and Just Plain Different; all by Ten Speed Press. Asher speaks 100+ days a year from coast to coast to college and corporate audiences. This column originally appeared in another form in USAirways magazine.