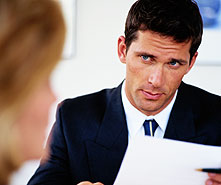 Q: I recently went on an interview for a school paraprofessional position. The head of the school board asked me if I was a team player, and what I would do to become one? I didn't know what to say because I didn't know exactly what he was referring to. Is it OK to be direct and ask for specifics? What happens when interviewers lead a person on in a guessing game of, "Do I know what kind of school population I am dealing with?" In both these cases, is it okay to be direct and find out what they're really asking, point blank? Or, do I have to pretend to know what they're talking about?

A: How do you deal with an interview whose questions are unclear at best and, more likely, contain a hidden agenda? Here are two approaches you might consider, using your team player issue as an example:

1. Given that most people have a common, straight-forward idea of what it means to be a team player, you might answer his question by saying, "My definition of a team player includes pursuing a common mission and goals with my colleagues, recognizing the sum of our experience and talent is greater than mine alone, covering my responsibilities and pitching in to help others as needed and presenting a united front on important issues. By that definition, I would consider myself team player."

Listing specifics that describe how you work on a team not only shows that you know how to do it, it also explains how you would easily join any existing teams when starting the job. You can also follow up on your answer by asking if your interviewer's definition differs from yours. If it does, find out how, then respond to those differences.

2. Another approach would be to say something along the lines of "I think I'm a team player. But it would be helpful to hear your description of one, so I can answer your question more fully." Listen to his description, and then respond to it point by point.

The school population issue sounds like a political mine field. Put yourself squarely behind the man with the map, and only go where he leads you. To keep your answer from blowing up in your face, you might say something like, "While I am familiar with the demographics of the school population, I'm not sure that's the question you're asking. From your perspective, what kind of population will I be dealing with?" Then answer accordingly. I hope you won't be working directly with the school board chair. He sounds like he enjoys playing with people's heads while they twist in the wind.