A Guide to Fitting In For Newly Hired Employees

A Guide to Fitting In For Newly Hired Employees 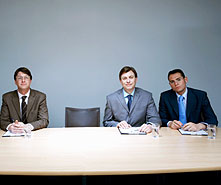 For newly hired employees in a workplace that's been hit by layoffs and budget cutbacks in the last few years, fitting in can be a challenge. Although companies are starting to rebuild their staff, already-established employees are likely to feel insecure about their jobs well into the economic recovery, say experts. And the newly hired employees who join those who've survived layoffs or cutbacks might find their co-workers wary of newcomers. That can make it difficult for recently hired employees to fit in and be productive.

But if you've landed the job of your dreams at a demoralized workplace, you can combat the negative feelings and find a way to fit in without being brought down yourself.

The first thing to do is take initiative and keep yourself from feeling the same anxiety current employees have been feeling. Anxiety is an emotion that's easily picked up from others, says Paul Baard, a professor at Fordham University and a workplace psychologist. As a newly hired employee still proving yourself, this is one emotion you cannot afford to pick up.

"The less dependent [you are], the less vulnerable [you will] be to going into an atmosphere that is anxious," Dr. Baard says. He recommends that newly hired employees "keep putting ideas out there" and keep moving forward. Don't get caught up in looking back at the bad times that have plagued the company for the last year or two, he says.

It's also critical to stay neutral. A demoralized workplace can be factionalized, so it's important not to take sides, says Margaret Morford, president of HR Edge, a management and training consultancy. "Stay out of the conflicts. If a co-worker needs to vent, tell them that you prefer not to hear anything negative about other employees since you have to work with them," she says. "Whatever you do, don't join in on the negative talk."

Your new co-workers may feel resentful and overworked from trying to fill gaps in staffing. Offer to lend a hand in order to demonstrate that you're there to help make their jobs easier. But don't be surprised if you're first met with suspicion in your attempts, experts say. "Everybody is a competitor" to workplace survivors, says Dr. Baard.

The key, he says, is to engage your new colleagues often and establish ongoing collaboration on projects or department initiatives. If you're particularly concerned about being seen as a threat, invite your co-workers to lunch. But do it one-on-one, says Ms. Morford. "As a group, they are used to relating in a way that doesn't include you," she says. "Groups may also bring tension with them to lunch."

If you're having trouble connecting, find someone-a mentor or more senior colleague-who can help you navigate the workplace and break the ice for you. This can even be somebody outside of your department. Look for a mentor who doesn't speak ill of other employees or the organization and who has a track record of working to mediate conflicts.

Finally, do your best to stay positive about your new role and the new office. Experts say it can take up to four months for newly hired employees truly get a picture of a workplace and its underlying social dynamics. And as established staffers finally recognize that the presence of new employees represents a positive turn for their company, their attitudes are likely to change, too.