"Every Job is Worthwhile"

"Every Job is Worthwhile" 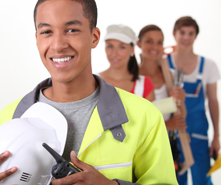 Celebrity gossip media unintentionally sparked an important national conversation about jobs this week, when actor Geoffrey Owens was initially mocked for his work at a Trader Joe's grocery store.

Owens, who played the character Elvin on The Cosby Show, received a deluge of support on social media in response, including a job offer from actor/writer/producer/director Tyler Perry.

#GeoffreyOwens I’m about to start shootings OWN’s number one drama next week! Come join us!!! I have so much respect for people who hustle between gigs. The measure of a true artist.

But it's the job for which Owens was initially mocked that the actor made an important point while appearing on the Sept. 5 edition of Good Morning Actor: "There is no job that's better than another job...Every job is worthwhile."

FULL INTERVIEW: @GMA EXCLUSIVE -- "There's no job better than another...every job is worthwhile..." Actor Geoffrey Owens speaks out, responding to job shaming and backlash after a photo of him working at a grocery store was posted online: https://t.co/0wZJnpowI9 pic.twitter.com/aNiG5fV2yf

Here at CareerCast.com, we publish our Jobs Rated Report each year with a breakdown of careers based on certain static criteria: Income, Growth Outlook, Stress, Environment. These are core factors that pertain to every job in every industry. A common misconception, or at least a frequently asked question each year when the Jobs Rated Report is released (or during publish any of its offshoots throughout the year), conflates the ranking of jobs with a commentary on their worth. When the Jobs Rated Report ranks careers, it's to give those either entering the workforce or considering career changes a snapshot of what to expect in various fields; what the pay will typically be, the difficulty of finding a job then having upward mobility, and the potential stressors and dangers inherent with the position. A job that ranks lowly is not unimportant or potentially fulfilling. Consider Newspaper Reporter, which routinely ranked last among Jobs Rated careers. There are reasons for this: The closure of newspapers across the country has put a difficult pinch on those seeking to either get into the fold, or those who have been invested in the industry for years. Pay has also stagnated. Were that not enough, Newspaper Reporter is a stressful job with demanding and constant deadlines, as well as intense public scrutiny. Newspaper Reporters are also important to a community in ways that cannot be overstated. The coverage a newspaper provides, especially at the local level, works for the public good. The same is true of a Firefighter, a job that always ranks near the bottom of the Jobs Rated Report's Most Stressful Jobs Report. Now take into consideration those careers we might take for granted. Imagine a month without trash collection. Envision trying to fix your own toilet the next time there's a plumbing issue. Just picture the chaos that would ensue the next time you visit a grocery store like Trader Joe's, and no one is providing the service akin to Geoffrey Owens' work. Owens may have been mocked, but in that brief moment of attempted embarrassment, he now gives voice to one of the most important discussions of the labor market.
Career Topics
Life At Work