Finding a Job in the "AGR" Economy

Finding a Job in the "AGR" Economy 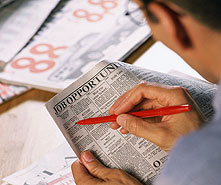 If you're looking for a job, you're probably doing so with two strikes against you. Why is that? Because most of the people in the job market today conducted their last job search prior to the beginning of the Great Recession, meaning that the conventional wisdom on which they relied is dangerously out of date. This recession hasn't just changed the rules of the game; it's changed the game itself. What was right for conducting a job search BGR (before the Great Recession) is totally wrong for doing so AGR (after the Great Recession). Yet that's exactly what a lot of people are doing.

It's understandable why so many job seekers think they can find a job the old fashioned way. After all, that approach worked for many years. The problem is, this traditional type of job search was based on two fundamental – and antiquated – assumptions:

Even when the economy contracted, it didn't fundamentally alter the way business was conducted. Therefore, people looking for work had just one task to accomplish: getting reemployed. It was always a challenge, of course, but at least it was a single challenge. We didn't have to multitask.

Recessions forced employers to implement temporary reductions in force. As soon as the economy began to rebound, they would quickly refill their empty positions – and even add new ones. The resulting "more jobs" recovery meant that unemployed workers could get by with tried and true job search techniques: they would send out a slew of resumes, do a little networking and before too long have several job offers.

These two assumptions underpinned the BGR conventional wisdom. It enabled job seekers to view unemployment as simply a brief interruption in their work lives. Careers remained intact even as workers moved from one employer to another. In effect, it was a "come as you are" job market. There was no need to shore up occupational prowess, develop new skills or strengthen professional networks. Peoples' careers were good enough just as they were.

This Great Recession, however, has reset the dynamics of the American workplace. Downsizing today is not a temporary reduction in force; it's a permanent reduction in structure. Employers are shaving huge chunks off their organizational charts, and those jobs will never be replaced. As a result, what began after the 2001 recession as a "job less" recovery has morphed into a "less jobs" recovery after this recession. There will simply be far fewer positions available even as the economy begins to grow.

What does that mean for you? If you're currently employed, it means you've lost your job security. If you're in transition, it means the quest for reemployment is now considerably more difficult. For both of you, it means accepting two new and very different assumptions and, without sugarcoating them, these truisms impose additional obligations on you:

What's the best way to embark on a positive course? If you're actively looking for a new job, you must first accept that your quest is now more challenging than it has historically been, and then adopt an appropriately tailored job search strategy. If you are currently employed, you must first accept that your job security has now disappeared and adopt the same tailored strategy as your unemployed colleagues. Here's what that entails:

As it was BGR, finding a job AGR is a full time occupation. Forget "funemployment." If you're out of work, you need to be dedicated to your job search 100% of the time, and with all of the talent and energy you can muster. If you're currently employed, on the other hand, forget coasting – you also need to be searching for a job, only the one you seek is the next opportunity you'd like to have. It may be with your current employer or another organization, but wherever it occurs, it must enable you to grow in the workplace.

Unlike during the BGR period, finding a new job today requires the effort of a second job. You have to push yourself outside your comfort zone and tap into more of your talent and energy than you've probably ever used before. You must be both a proactive job seeker and a proactive career-manager. This second job is every bit as important as your first, and should be given the same priority and effort. Said another way, working on your own career is just as critical to your success as working on-the-job for your employer.

To be a successful career self-manager, you must become an expert in "career fitness." You must accept responsibility for the health of your career. You must know how to increase the strength, endurance and reach of your career, and be dedicated to performing the activities that will achieve those outcomes.

One of those activities, for example, is to "pump up your career's cardiovascular system." The heart of your career is your professional knowledge and expertise. When you're looking for a new job, enroll in a professional development course to improve your skill set. This simple step will signal to employers that you realize the importance of staying current in your field, and that you take personal responsibility for doing so.

A new era is dawning in the American workplace. Coming as it does after the Great Recession and shaped as it is by that extraordinary event, it's most appropriately described as AGR employment. It is an environment unlike any we've ever seen, but one that holds great promise for those who can (and will) adapt.