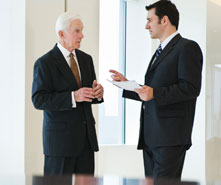 Question: I don’t know what happened. I just finished managing a project that has occupied most of my days for the last 18 months. My project was on time and within budget and I expected a lot of kudos, probably a raise or even a promotion. None were forthcoming. What did I do wrong?

Answer: Recently I had lunch with a mystified MIS Director who had done exactly what her CEO wanted. She'd installed state-of-the-art systems throughout the company. When the president asked her to resign because of philosophical differences, she couldn't understand what happened. Hadn't she delivered on his executive mandate?

At a conference a couple of weeks ago, I met Bob S., a savvy marketing manager who was seeing a disturbing pattern in his career. He would start off in tune with management, accomplish great things and then eventually feel like an outsider. What was he doing wrong?

One of my clients, an ambitious consulting MBA, worked long hours his first year handling a lot of projects typically done by higher-level managers. He figured his combination of hard work, outstanding accomplishment and positive client feedback would lead to an early promotion. He was quite disappointed when his supervising partner did not grant him one because, "We simply don't move people up after only one year. Promotion requires at least two years."

These professionals were all severely disappointed in management's response to their excellent performance. Instead of reaping a just reward, they felt rejected and undervalued. Do any of scenarios sound familiar?

Like the vast majority of business professionals, these careerists were acquainted with only half of the "success equation." Their ignorance of the other key component caused their problems.

While they understand the need to do a good job, they don't realize it's equally vital to communicate effectively with the people in their company who can make or break their careers. Instead of isolating themselves, they should be talking regularly with those who can sell their ideas to key decision makers, grant raises, promotions and growth opportunities and protect them from hostile factions with differing agendas.

Let's take a second look at each of the above professionals’ scenarios and see how a little strategic communication could have saved them a lot of distress:

For you to be successful in your career, excellent work and proactive communication with your managers, peers and employers are both essential.