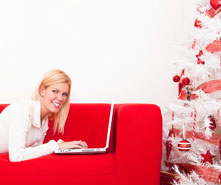 As the merriment of the holiday season weaves its way through the land, your job search shouldn’t embrace a silent night. Though most job seekers assume the time between Thanksgiving and New Year’s is a dead zone for hiring, it’s not true. Jobs are filled year-round and companies are agnostic when trying to fill open positions at year end.

The common perception that hiring disappears during the holidays is a myth, says Doug Richardson, a Philadelphia career counselor. "By doubling your efforts over the holidays at a time when many other unemployed workers are focused on activities other than job hunting, you increase your odds of finding a new position,” he says.

From first-hand experience, I know that the holiday period is a great time to job hunt. In fact, twice I’ve been unemployed during the holidays and both times I was gainfully employed by Christmas, and it wasn’t because I was just lucky in my job search. I knew that the odds were in my favor and used the following tips and techniques to network my way into employment:

Most companies don’t change their hiring practices just because the calendar shows December. Even if the new hire isn’t expected to start until the new year, the interview and selection process has to be completed before then. Sure, it might be more challenging for you to coordinate schedules for interviews, but employers want to make sure the new hire is ready to join come January.

The holidays are a great excuse for job seekers to reach out to old work contacts to wish them good will. Naturally, this is also a great (and non-threatening) opening to catch up with previous employers and co-workers and to let them know you’re in the market for a job. Of course, you want to be authentic in your holiday wishes, so make sure you’re sincere in your sentiment.

Be Merry and Bright

Holiday parties are an excellent time to catch up with old friends and make new ones. Take advantage of these happy gatherings to talk to everyone you know – and everyone they can introduce you to - to make possible job connections. It doesn’t have to be a sales pitch or feel like you’re the unemployed Debbie Downer of the party. Just be honest when people ask what you do and let them know you’re in the market for a new position. You never know what connections they may have and may be able to make for you.

It’s always a good time to be thankful for what you have, but the holidays are particularly appropriate to thank all of those who have taken time to help you in your job search. Send them an old-fashioned, handwritten thank-you note to let them know how much you appreciate their help and advice. A little thanks can go a long way in your networking efforts.

Most job seekers decide to abandon their job searches until after the new year to focus on friends and family. This means less competition and better odds of finding a job if you put forth a serious effort. With most of the competition for new jobs spending the holidays on the sidelines, determined job seekers have a mathematical advantage for uncovering interview opportunities.

Even if you aren’t hired before the new year, your efforts can still pay off. The holidays create an opportunity to network and connect with others who can help you find your way out of the unemployment line. By vacationing from job hunting during the holidays, you may be passing up on a potential job prospect. Plus, when January rolls around, you’ll have a head start on all of those dawdling job seekers.

So take advantage of the holiday happiness to make connections. Get motivated, be merry and mingle your way into a new job.