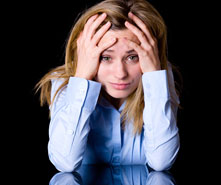 In the current economy, companies are often expected to turn on a dime in response to changing market needs in order to stay vibrant. What that means is that many companies are constantly reorganizing-not just every year but sometimes as frequently as every 6 months. Employees live in a constant state of change including new processes, new procedures, new bosses, and new organizational structures. Employees are measured on goals that were typically set before the changing economy and then never modified.

As a result, there is very little loyalty to employees, many of whom may have been valued in the past. The new emphasis in the workplace is on “what have you done for me lately?” This changing dynamic in the workplace has lead to ever increasingly rates of stress, low worker satisfaction, poor morale, and ultimately, burnout.

Linda Barrington, managing director of human capital at the Conference Board, who helped write a 2011 report on job satisfaction, says that even workers who were lucky enough to get jobs during the current economic downturn are becoming more dissatisfied with their jobs. The report she helped write found that only 45% of Americans are satisfied with their work. Job satisfaction rates had been steadily going upward before 2008 but took a sharp downturn after the recession hit.

Workers entering new positions in a time of limited employment opportunities are often so happy just to get a job that they either ignore or fail to realistically look at the demands of the job. Consider Jane Greer, an older worker involved in developing marketing and public relations strategies for a firm in St Louis that provided her no job protection and hired her on a temporary basis. She said that:

What should Jane have done before taking the job?

1. She should have spoken to others on the job. While not everyone is honest, most people who are under great job stress will give you straight information.

2. Jane should have asked for and gotten training for the job and asked that it be part of her hiring letter. In the event that the training didn’t materialize, she would have had a good argument that her stroke was work-related because she lacked the proper training.

3. She should have made an honest appraisal of her physical and emotional stamina for a difficult job. Jack, an older retired academic accepted a teaching position that required him to drive an hour each way to teach a late evening 3-hour class and then get up early the next morning, do the same long drive, and teach another early morning 3-hour class. He told me he felt “comatose” by late afternoon the 2nd day and was tired the following day as well. He won’t do it again but a realistic appraisal of age and stamina would have told him it wasn’t a good idea to accept this schedule and admits he was so enthusiastic about getting back to teaching that it limited his objectivity.

4. Like too many of us, Jane thought her previous job as a journalist was a lifetime job. She’d never experienced a recession this bad and happily lived on credit. When she took the PR and marketing job she was facing foreclosure on her beloved house and was deeply in debt. The need to be solvent financially drove the decision to take a job she was unprepared and unqualified to do.

5. Jane thought others would help her get up to speed, but because of the toxic environment she worked in where people felt a certain satisfaction in the failure of others, she was actually given wrong information and learned she couldn’t trust many of her co-workers.

6. It would have also been wise for Jane to keep a journal describing the work environment and the effect it was having on her. Even though her job came without any specified security there are basic workplace rules that apply when workers are being treated in ways that are determinable to their health and well being. In her case, having evidence of her treatment at work might have improved the possibility of getting her old job back with, of course, some real changes in the way she was treated.

In the past 20 years, many studies have looked at the relationship between job stress and a variety of physical ailments. Mood and sleep disturbances, upset stomachs and headaches, and disturbed relationships with family and friends are examples of stress-related problems that often result when work-related problems exist. These early signs of job stress are usually easy to recognize, but the effects of job stress on chronic diseases is more difficult to determine because chronic diseases takes a long time to develop and can be influenced by many factors other than stress. Nonetheless, evidence is rapidly accumulating that stress plays an important role in several types of chronic health problems including cardiovascular disease, musculoskeletal disorders, and ulcers. Major emotional problems related to job stress include depression, anxiety, anger, violent behavior, family violence, alcoholism and drug addiction, burnout, and in very severe cases of depression, suicide.

In a 2006 article on worker burnout in careerbuilder.com, Kate Lorenz provides the following signs that worker stress is beginning to move to burnout:

Sign No. 2: Coming to work late, wanting to leave early, dreading coming to work at all, watching the clock, and counting the minutes until you leave.

Sign No. 3: A sense of apathy and a lack of motivation. You no longer want to be challenged.

Sign No. 5: You feel exhausted much of the time, have headaches, feel tension in all of your muscles, and have trouble sleeping.

If you’re out of work or newly looking for work, it’s a temptation to take whatever comes up, but many people like Jane and Jack have experienced the problems related to taking new jobs without properly evaluating the stress associated with the work. Extreme pressure to perform in an economy where workers are asked to do more and more are perfect environments for stress-related problems. Ask others, be honest about your ability to cope with stress, and if you badly need to take a less than desirable job, take the best job under the circumstances, even if it’s for a short period of time, while you continue to look for something more suitable. Don’t make an exhausting job a career. As too many people have discovered, the short and long term effects can be very dangerous to your health and survival.

Dr. Morley Glicken is a faculty member in the School of Social Work at Arizona State University. Parts of this article come from his newest book: “Treating Worker Satisfaction and Job Burnout: Helping Workers Cope with Stress during Uncertain Economic Times” to be published in 2012 by Elsevier Publishers. He may be contacted at:mglicken@msn.com