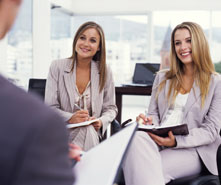 The recruiter leaned toward me and whispered, "I can't believe it, Gene Hackman is my favorite actor of all time." The job interview then became a conversation mostly about movies, with the recruiter doing most of the talking. He did manage to ask a few work related questions, but as I answered them his eyes kept drifting over my shoulder to focus on Gene Hackman. I thought the interview was not going well.

At the end of the breakfast just before we left, the recruiter politely stopped by Mr Hackman's table to tell him how much he admired his work. Mr Hackman was very gracious.

The job market is extremely competitive. Many of the skills of yesterday no longer have the same market value they did even a few years ago. And every good job you're qualified for draws an incredible number of competing applicants.

What you already know is that doing everything in your job search perfectly: the best research; the perfect cover letter; the ideal resume; highlighting the right qualifications; and finely honed interview skill; only gets you on par with the top 25 candidates for the job. In that environment, getting an interview, and then actually getting an offer comes down to luck. Of course, that assumes nobody else has an inside edge or can create a Gene Hackman "peak -end" moment.

The structured interview is just the opposite. A defined set of questions are carefully put together and relate to the needs of the job. The interviewer asks every applicant the same questions in the same way and scores each question based on the applicant's answers.

While the structured interview is better than the unstructured interview in terms of validity, it still remains as good as a flip of the coin. If you keep in mind that candidates are pre-screened before they get to the interview process, and you can reasonably believe that the pre-screen is effective, then you'd be just as likely to hire a successful candidate by flipping a coin as using the structured interview. What the hiring decision often comes down to is a matter of preference. Three or four of the interviewees may seem reasonably qualified. The ultimate selection comes down to the person who is most liked by the hiring manager.

Great jazz soloists know that when they are playing a solo, they have to hit one or two peaks in the body of the solo and end with a flourish. That's because people evaluate an experience based on its peaks (good or bad) and how the experience ended. Psychologist Daniel Kahneman is credited with describing this rule...his insight had a big impact on the scientific side of the study of economics. So much so that Daniel Kahneman won the 2002 Nobel Prize in economics, despite being a psychologist who never took any economics courses in college.

When people assess a past experience, they attend to two things above all: how it felt at the peak and whether it improved or worsened at the end. It is important to recognize that everything else isn't forgotten, it just isn't used in how we judge the quality of the experience. What that means is that we make decisions, not on a rational basis that fairly evaluates the whole experience, but rather on the peaks and especially on the ending.

The peaks and the ending will average themselves. That's why in every interview, how you end must be the highest peak. So when you plan how you want your interview to flow with a hiring manager, your goal should be to produce two peaks evenly spaced, followed by a very strong ending.

But the interview itself did not seem to be a good one. An observer would have seen that the moment Gene Hackman walked into the room, the recruiter's ability to focus on the interview was compromised. And, the truth is, I made no real impression on the recruiter. Just a few years later, he didn't ever remember who he was interviewing.

What caused the recruiter's brain to evaluate the episode the way he did was something other than the verbal content of the interview. It was the peaks and how the episode ended. Mr. Hackman's presence in the room for much of the interview created a series of peaks for the recruiter. Then, when the recruiter ended the interview by actually talking with the actor, it created a huge end-peak, one the recruiter still remembers today. I was lucky simply because I happened to the person he was interviewing that day. Of course, luck always plays a large role in every job hunt. But by creating peaks and a strong finish on your own, you'll help make your own luck.

Author of The Peak Interview: New Insights into Winning the Interview and Getting the Job, Bill Burnett is an executive with more than 25 years of global business experience, having worked with customers in 65 different countries around the world. He is a thought leader with unique expertise in understanding what creates and sustains engagement in the workforce and providing CEO's with the tools needed to build an engaged workforce. Bill is also the author of the book Advantage: Business Competition in the New Normal, which makes a convincing case that competitive advantage depends upon great problem solving, and great problem solving only happens where the workforce is fully engaged.