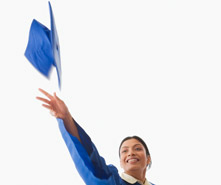 Summer is nearing its end, and around the nation hundreds of thousands of college students will return to their classrooms. For many, the ultimate goal of earning a degree is to land the best job possible.

The educational choices you make as undergraduate student will directly impact your job prospects in the future. In fact, the work opportunities available after college tend to be very different from the curriculums you study on campus. For those mapping out their professional lives, the path to rewarding employment in some fields is more arduous than others.

For example, science and mathematics disciplines offer some of the most promising career paths. Engineering in particular has a very strong outlook for new graduates, particularly those with some work experience, as the unemployment rate among this group tends to be less than 5%. The Georgetown University Center on Employment and Work Force (CEW) recently published a report detailing its findings on students’ chosen majors and their subsequent employment prospects.

Its findings match those from the U.S. Bureau of Labor Statistics (BLS), which found that jobs in the Science, Technology, Engineering and Math (STEM) fields are the most plentiful nationally and pay better than other disciplines.

An engineering student can make $54,000 upon joining the workforce, Georgetown reports. BLS estimates agree, and project the lowest salary for mechanical engineers is around $52,000 annually, while electrical engineers are pushing $57,000 on the low end.

Other science and math majors, including nurses, also have promising job prospects. Employment of recent nursing graduates is over 95%, and some employers are facing staffing shortages and paying bonuses to attract qualified RNs, as well as physical and occupational therapists.

Of course, not every student is meant to be a technical or health care whiz, and many find it's not for them once they start taking classes in the field. A National Bureau of Economic Research report says that students embarking on STEM educational paths are the most likely to change majors during their college career due to the stress of the difficult and complicated workload.

Among other fields with improving job prospects, elementary education majors are some of the most highly sought-after graduates with a 5% unemployment rate. And surprisingly enough, business majors are also needed, but the competition for good jobs is high.

As President Calvin Coolidge famously remarked, “the business of America is business.” According to the National Center for Education Statistics (NCES), business is also easily the most popular major among American students. An estimated 400,000 Bachelor’s degrees in business will be conferred next year. The next most popular fields, social sciences and history, didn't reach even half that number.

More students obviously mean greater competition in the job market, and the Georgetown report found that the unemployment rate for recent business Bachelor’s degree recipient was over 7%.

Debate about the value of an advanced business degree (Master’s of Business Administration) has gone back and forth in various media outlets, but Georgetown estimates it pays to pursue a postgraduate degree. Unemployment drops by 3% for those with an MBA, and recruiters say that hiring of business postgraduates is “on the upswing.”

In the improving construction industry, architecture is a top job for recent graduates. Landing a position was challenging after the collapse of the housing market in 2008, however, architecture majors shouldn't feel too discouraged. As the housing market improves, job opportunities will rebound as the BLS estimates 24% growth in the industry by 2020. Until then, it might not hurt to consider a double-major.

Other challenging fields for college grads include the arts, with three different disciplines carrying graduate unemployment over 10%: photography (11.4%), commercial art design (10.5%) and fine arts (10.1%). Indeed, the challenges for artists are evident in our 2013 Jobs Rated report, which ranks the job No. 147 out of the top 200.