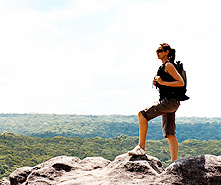 Many experienced executives unhappy with their jobs are as afraid of tackling a mid-life career change as they would be planning an ascent of Mt. Everest – both seem distant, difficult, scary and potentially disastrous. Yet in terms of planning and execution, those looking to start a new career have much to learn from mountain climbers.

Building a Base Camp

A lot of aspiring career-shifters are trying to escape career unrest or career catastrophes, and charge unprepared into this major life transition period. Successful Himalayan mountaineers, on the other hand, don't just hop off the plane and charge up the mountain. First they build a temporary base camp, a place from which to plan routes, organize resources, do reconnaissance, and work themselves up to full climbing fitness.

A sabbatical may be one good way to build a base camp. Effective sabbaticals are not simply "time off;" they are opportunities for job search reflection, research and reality-testing, as well as motivational renewal. If you can't afford a sabbatical (or your employer won't let you take one), you still can carve out a personal "pseudo-sabbatical" – a personal space and time for reconsidering where you've been, where you are, and where you want to go. This is the time to look at the full spectrum of life issues: the needs and fears of your family, geographical preferences, the makeup of your circle of friends.

For middle-aged boomers, base camp building absolutely must include a thorough review of present and future finances, including budgetary discipline, concentrating on fiscal fitness, and putting extra money away. It also should include getting a physical exam and a stress test to assay your stamina and address any health and fitness issues that may impact your climb up the mountain. Don't rush the building of your base camp. This crucial planning and preparation stage may take a year or more.

Which Mountain Should I Climb?

Of course, before setting off, career shifters first must figure out which mountain to climb. Basically there are two, joined by an intermediate route. One mountain, let's call it K-2, is defined by a fundamental need to sustain, replace or increase your income. Your route and options for climbing K-2 are different from those involved in climbing the other mountain – let's call it Everest – where your highest priority is self-actualization and work-life-family balance. Everest-climbers have enough financial resources to consider roles that pay less, pay little, or perhaps don't pay anything at all.

Alternative Paths to the Summit

George Dow, who has helped senior executives engineer career and life transitions at Right Management Consultants in Minneapolis for over 15 years, suggests that K-2, the income-dependent mountain, has three levels and that climbing gets harder the higher you go. "The easiest transition is into a new environment, a new setting," he says. "You maintain your existing market identity, but seek out a more satisfying and more remunerative setting in which to practice your trade."

A tougher climb, says Dow, is into new terms, that is, roles that involve changes in how you are compensated – from salary to contract work, part-time of flextime, for example. Here, the challenge is to communicate your strong market value and not suggest that you are willing to settle for less overall compensation.

K-2's toughest challenge, suggests Dow, is creating a new venture. "Here, you are reshaping both the product and the environment, building something entirely new, which involves greater risks and no safety net." The entrepreneurial option may be both lucrative and exhilarating, but it isn't right for everyone. Natural risk-takers may reach the summit, but more cautious people may do better avoiding extreme challenges.

When Money Is Not a Major Factor

When climbing Everest, the self-actualization mountain, Dow notes that many career-shifters start off with what he calls "a portfolio phase," a transitional period where one leaves full-time employment and combines revenue-gathering work, volunteer or altruistic activity, and purely self-satisfying activity – often travel. "Many people who can't stand the idea of a full retirement," says Dow, "find they are very happy with a portfolio mix where each type of activity occupies about one third of their time."

Summiting Everest – perhaps a career-shifter's most demanding climb – may involve complete re-definition of one's work, passions and rewards. "Forging a new identity can represent the richest and most satisfying life challenge," Dow says, "particularly for people who feel their prior career path was made up of unplanned choices, or who for years responded mainly to others' demands or expectations. They can find joy and liberation in exploring entirely new paths, roles and settings."

Actually, there is a middle route between the mountains for many boomers who have a lot of life left to live, but lack focused career direction: "Dissatisfaction with their current situation may be high," says Dow, "but maybe vision about the future is still blurry. If you take the time to build a good base camp, you don't have to head up either mountain immediately – or even decide which mountain you'll finally attack."

Dow says the lowest level of this in-between route is continuation, a period where you hold on to you present role but begin serious planning for the future. From there you can move up to trying an exploratory and enjoyable sequence of "experiments" – brief sojourns into diverse activities that help reality-test whether an attractive fantasy can be translated into an attractive reality.

Before their final ascent, skilled mountaineers invariably take a series of practice climbs to acclimatize themselves: they go up part way and then return to base camp, over and again, until they are ready for the final push. Similarly, says Dow, "sequencing can take the form of a series of avocational activities or non-permanent employment projects. It is important that each experiment have learning value and help shape the best route for the future."

Successful mountaineers have much to teach people undertaking mid-career renewal: Know why you're climbing. Go slow. Plan ahead. Build in some trial-and error. Fine-tune your focus. Above all, enjoy both the climb and the achievement.