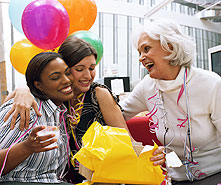 Gail S. and Minette R., a former HR VP and CFO, respectively, have recently started a consulting firm that combines human resources and financial acumen to help organizations get through major changes such as downsizing, mergers, turnarounds, exceptional growth or IPOs. Rather than continue struggling in a tight job market, both these former employees decided to found their own company, increasing control over their careers and personal time, and achieving a greater impact on their company's clients and culture.

While Gail and Minette have had to forgo prestigious positions and steady paychecks, and their transition hasn't been idyllic, they have no desire to go back to the 9 to 5 world. The freedom to explore new possibilities and chart their own course has them hooked.

People contemplating a move from a large to small company, or starting a business of their own, often hear a number of myths and truths about entrepreneurial firms. Most of the myths are perpetuated by stereotypes, while others sound suspiciously like sour grapes. And although the truths aren't new, professionals smarting from a poor economy, corporate downsizing, mergers or politics have only recently discovered them.

Below are some familiar statements about small businesses. Which ones can you believe?

Few jobs, even government ones, are safe in poor economies. Many of our most successful companies started in back bedrooms and garages in the midst of major recessions, often because their founders couldn't find jobs. Entrepreneurial newbies who learn to run a business when times are tough will hit the ground running when things improve.

Not anymore. The glory days of employment for life in large organizations are long gone. Today, many entrepreneurs start their own companies because they have been downsized or re-engineered so many times, they are determined to take control of their own destinies.

In addition, people who work in smaller companies with good management generally feel more secure about keeping their jobs, because they have a more personal relationship with the owner. Entrepreneurs will move heaven and earth to make payroll. Most lay off their employees only as a last resort. Shareholders and earnings expectations are not an issue for them.

With rampant downsizing and reorganization in large corporations comes the opportunity for small firms to provide services that used to be performed in-house. How many professionals do you know who have been laid off, then return to their former employers as independent contractors? Now that companies are cutting employees and even whole departments, small firms that can execute these functions are in great demand.

Big companies have also become more interested in doing business with smaller ones. They have found entrepreneurs often provide higher quality service for less money, because their staffs tend to be seasoned experts with low overhead versus newly-minted MBAs with inflated expenses.

Back when EDS, now a part of HP, was a subsidiary of GM, a very frustrated Ross Perot said, "If someone at EDS sees a rattler, he kills it. If a GM manager comes across one, he puts together a committee to discuss the situation." That paralysis eventually led to GM's bankruptcy and its huge government bailout.

Entrepreneurs tend to be more creative, more nimble, and more aggressive in pursuing new opportunities. They also don't have the luxury or comfort of being king of the jungle. As a popular motivational plaque says, "When a gazelle wakes up in the morning, he faces two choices: He can either run like hell or be a lion's breakfast." Small businesses have a lot in common with gazelles.