A Career In The Sky: Becoming an Airline Pilot

A Career In The Sky: Becoming an Airline Pilot 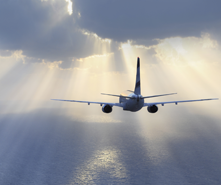 Editor's Note: Airline pilot is featured in the 2015 Jobs Rated report on Most Stressful Jobs. For those ready to take on the challenges of this career, the following is your guide.

Ask the average American which superpower they'd like to possess, and plenty will say they'd love to fly. There's just something about the freedom of soaring high above the clouds that inspires us all.

So why not make those dreams a reality and pursue a career in the sky? It's not as difficult as you think to become an airline pilot.

A Typical Day in the Sky

Airline pilots work for air carriers, navigating their air fleet so passengers and cargos arrive safely at their destinations. On a typical day, a pilot will check the aircraft's condition, its fuel supply, and the weather forecast before taking to the skies. While flying is freeing, an airline pilot must operate his aircraft along planned routes to suit a predetermined schedule. He must also monitor the engine and other systems and fuel consumption during the flight. Any changes in the weather or the plane's functioning must be considered and acted upon. During the flight, pilots use the aircraft's radio system to communicate with air traffic controllers on the ground.

Depending on the air carrier, two pilots may work side by side, with the most experienced serving as the captain or pilot in command. A third pilot, known as a flight engineer, may monitor the instruments and operate the controls of older aircrafts. All pilots must work together to ensure the flight, especially the difficult take-off and landing, go smoothly.

Once they're back on terra firma, airline pilots complete records documenting their flight details and the aircraft's status.

The Perks of Being a Pilot

For most airline pilots, the ability to spend time flying planes while getting paid for it is the biggest perk. The job is also ideal for people who want to see the world. While away from home, pilots are generally compensated with free hotel accommodation, airport transfers, and meal allowances in addition to their regular salary.

Senior airline pilots often receive their preferred routes and schedules, so there are considerable advantages to putting in the hard yards. Education and Training Commercial pilots can get by on a high school diploma, but to become an airline pilot, you'll probably need a bachelor's degree in aviation.

In addition, you'll need to obtain a commercial pilot's license from the Federal Aviation Administration, an Airline Transport Pilot certificate, and an instrument rating. This rating is required to transport paying passengers more than 50 miles and navigate through conditions impeding visibility, such as heavy cloud. Most airline pilots receive training from a flight school or independent flight instructor.

Some flight schools are part of universities or colleges while others belong to fixed base operators. After receiving the necessary credentials, many airline pilots hone their skills as commercial pilots.

Only once they have clocked up thousands of hours taking charter flights, assisting in rescue operations, or in other commercial capacity will they be considered by an airline. New pilots at regional airlines typically have around 2,000 hours of flight experience under their belts while new hires at major national airlines have typically logged twice that number of hours.

It's also not unusual for military pilots to become airline pilots once they serve their terms.

In addition to assessing qualifications, many airlines will also administer psychological and aptitude tests to determine the character of applicants. If they are satisfied, airlines will give their new recruits on-the-job training in line with Federal Aviation Regulations. This training is generally made up of six to eight weeks of ground school and 25 hours of flight time.

What Does it Pay?

The relatively small number of hours airline pilots working for regional carriers need is reflected in their salaries. A new first officer can expect to make around $21,000 a year, roughly $40,000 less than a newly recruited airline pilot at Delta or United would stand to earn.

Leaving American soil and working abroad can have its advantages, according to the Air Line Pilots Association. A new first officer working for Emirates Airlines in the U.A.E. would stand to make $82,000 per annum, plus a housing allowance and a host of other benefits.

With hard work and dedication, a dream career in the sky could be yours.