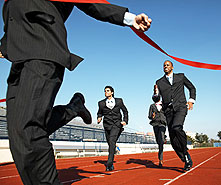 The common understanding of talent limits it to exceptional people who engage in exceptional activities. According to this view, only a few people have talent, and it is only expressed through major achievements in highly-competitive fields.

Talented people are professional athletes, entertainers and artists. An opera singer at the Metropolitan Opera in New York City has talent, while the best a bank teller or a plumber can be is good at their job. Talent, as we're told, isn't something the masses have. You may be an exceptional performer, but if you have an unexceptional occupation that isn't really talent.

The Conventional Elitism of Talent

Saying that only a select few have talent is a pretension that strikes at the very heart of human equality. This elitism of talent has its roots in the industrial era. In the early decades of the 20th Century, mass manufacturers needed employees who would work like machines, performing the same tasks over and over again.

This need helped to create the myth of the "unwashed masses," which set common people – the working class – apart from their more educated and cultured betters. It was a derogatory description with synonyms like "boorish," "simple-minded" and "talentless."

Following the lead of industry, the academic establishment reinforced this talent divide by introducing an education system designed to relegate all but an exceptional few to mediocrity. Called "gifted and talented" programs in elementary school and "advanced placement" in high school, these initiatives didn't just serve the needs of smart kids – an admirable goal – they also communicated a sense of inferiority to those not selected. In effect, the "normal" kids were told they didn't have talent, and thus were second class citizens in the nation's educational system.

The Duke University Talent Identification Program, for example, describes itself as "a global leader in identifying academically gifted students and providing them with innovative programming to support their development." In other words, a person isn't talented unless they are academically gifted. If a kid doesn't score high on some so-called "intelligence test," they aren't smart enough to do extraordinary things in life and thus should receive only uncreative programming and support.

The dictionary takes a more pluralistic view of talent. It defines the word as "the natural endowments of a person" and an endowment as "a natural gift, ability or quality." There is no qualifier limiting talent to extraordinary people – or extraordinary jobs. The term is not reserved for famous people. Quite the contrary, talent is a natural characteristic of all humans, and can be expressed through many different interests and occupations.

There is talent in being an exceptional salesperson, or an extraordinary truck driver. Talent can be expressed by an especially good customer service representative or bank teller, or by an electrician, mechanic, carpenter, computer programmer – you name it. Talent is not in what a person does, but in how they do it. Talent is the expression of excellence, and that excellence can be attained in any profession.

The days of only valuing the talents of a select few are over. A shift in perspective is underway, as more and more job seekers are understanding these two major principles:

These principles are at the foundation of the democratization of talent. They're driving a new movement in the workplace, the Career Activist Republic. This emerging culture affirms the nobility of all human work, and of all of those who perform it.