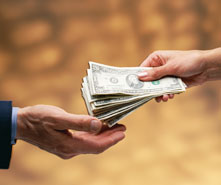 Many employers are planning to reinstate salary increases in 2010, but some compensation experts say base salaries are unlikely to return to pre-recession levels anytime soon. Of 555 large U.S. employers polled in October, 83% said they will give out raises next year, while only about half did so in 2009, reports Hewitt Associates Inc. None anticipate pay reductions next year, after a 10% cut salaries in 2009.

Companies will raise salaries in 2010 by an average of 2.5%, the second-lowest level on record since this year, when salaries dipped to 1.8%, the survey shows. In 2002, companies raised salaries an average 3.6%, then the lowest level on record, which was down from 4.3% in 2001, Hewitt reports. "We're going to be living in the upper 2% and lower 3% neighborhood for a very long time," says Ken Abosch, North American compensation practice leader for Hewitt. "Companies have fought very hard to bring their cost structure under control and they're not going to easily allow costs to creep back."

But Peter Cappelli, a professor of management for the Wharton School at the University of Pennsylvania, says salaries could return to – or possibly even exceed – pre-recession levels when the labor market tightens again. "It's just supply and demand," he says. One other variable to consider is inflation. "If it stays really low, wage increases will stay really low. If it rises, so will nominal wage increases," he says. Another survey indicates employers expect to give merit increases in 2010 averaging 2.8%. Polled in October, respondents include 201 mostly large U.S. companies; 54% said they plan to end salary freezes in the next six months.

Mr. Abosch says he recommends that employers allocate the majority of their budgets toward their top talent. "Companies should be doing everything they can to try to retain their high performers and their high potentials," he says. "They could stand to take some chances and let their average and below-average performers leave, because there's a supply of talent waiting to be hired." But, he says, it looks as if employers won't do that. "We're going to see organizations spread paltry salary increases across a broader population, trying not to disadvantage anybody," says Mr. Abosch. "Companies are feeling at risk due to the warming of the talent labor market."

Survey respondents indicated that many firms plan to lift hiring freezes, he adds, "so we know there's going to be some movement." Plus, he says, anecdotal evidence supports his theory. "I've had a lot of my clients tell me they're already starting to see talent leave their organizations." Almost half of companies surveyed by Watson Wyatt said they plan to reverse hiring freezes in the next six months. Almost all respondents said they've made offers to new hires in the past three months, and the 93% anticipate hiring additional people by January.

Laura Sejen of Watson Wyatt, expects most employers to reward their best people with the biggest raises in 2010, in part because that's what they've always done. "We know that top performers tend to receive increases that are close to two times that of the average performer," she says. What's more, current market conditions render the strategy critical "since there wasn't much money to go around in 2009, in 2010, you can expect employers to focus on delivering larger pay increases to their top performers," says Ms. Sejen. "These are the employees who drive company performance and are likely to be targeted by competitors who are selectively looking to hire away talent."

MDI Holdings will give out raises in 2010 – though only to top performers– after freezing them for everyone in 2009, says Richard Willich, chairman and chief executive. The diversified health-care technology company laid off about 20 workers earlier this year. In 2010, about half of the firm's remaining 180-person work force will receive merit increases averaging from 5% to 10%, and about 20% will receive bonuses on top of that, he says. "It's a business decision because the top performers are going to contribute the most to the company's results."

CT Partners LLC did more than freeze salaries in 2009. The global executive-search firm cut all of its 290 employees' pay by 10% in January, following more than 100 layoffs the year before, says Brian Sullivan, CEO. But the company in September reversed half of the cut, with the other half to be added back on December 1. "As long as the economy continues to go at least at the pace it is now, we will reinstate our usual performance review and merit-raise process," he says. In the past, raises averaged between 3% and 5%, he says.

Both companies are part of a bigger trend. In recent years, employers have been setting aside larger portions of their salary budgets toward variable bonus pay. Employers spent an average 10.8% of their budgets on bonuses in 2008 and anticipate they'll pay 12% this year, according to Hewitt. For 2010, employers are planning to set aside 11.2% of their salary budgets, though this is down from the 11.7% they projected earlier this year. "Bonuses represent a variable expense to employers," says Mr. Abosch. "You pay it this year and you don't live with that as an ongoing liability."

Based on this growing trend, recruits brought on to fill vacancies created by layoffs in most cases shouldn't expect to receive salary offers greater than what those positions previously paid. "There's been downward pressure on wages as a result of the recession," says Ms. Sejen. "Salaries then for new hires are likely to be fairly flat relative to prior years."