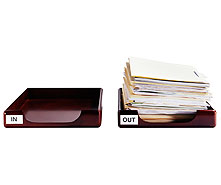 If you want to learn how to squeeze more out of a single day, ask someone trying to change careers. Heather Huhman of Washington wakes up just after 4:00 a.m. and hits the gym. Before Ms. Huhman walks into her office at a national health-care association, she writes a column for a local news site. It's something the 27-year-old does to help build her platform as a career expert – a necessity for the success of the company she has founded on the side, Come Recommended, which specializes in helping people find professional references. And it's this fledgling business that gets a majority of her attention outside business hours.

Ms. Huhman may sound like a workaholic, but she says she regularly makes time to eat meals with her husband and watch college football on weekends. How does she do it? "Prioritizing is incredibly important and I am a huge to-do list person," she says. "For Come Recommended, I keep everything on a whiteboard so it's easy to identify what needs to be done and by when. At work, I carry a notebook with me everywhere, highlighting items once they've been completed." And, though she has three "jobs," Ms. Huhman says she mentally notes that her "full-time one takes precedence."

Some productivity tactics have been around since the dawn of work. Some of my favorites: Clear off your desk and computer desktop so you don't become overwhelmed by too many tasks claiming your attention at once; and don't put a team meeting on the calendar without a specific agenda that will result in a concrete strategy.

Also, fight the urge to procrastinate by breaking down complex projects into smaller tasks that are easy to start. If you promise yourself a break or a reward once each mini-task is completed, you will be better equipped to push through.

In 2009, I saved a lot of time by replacing in-person meetings and seminars with video calls on Skyp and Webinars using WebEx. Skype is free; all you need is a Webcam with a microphone.

Kevin Purdy, an editor at Lifehacker, a productivity blog, says in 2010 he sees more individuals taking advantage of new Google products such as Google Voice, which transcribes text messages and voicemail directly to your email inbox, and Google Wave, a tool that facilitates virtual teamwork with a chat-like device that allows for video, instant messaging and document sharing. Most of Google's tools are still free, and the data are safely backed up and available anywhere you have an Internet connection.

Mr. Purdy also is enthusiastic about the roll-out of Microsoft's Windows 7, including a feature that allows you to pin documents to different applications controlling where applications appear on your desktop, "which saves search time," he says.

Research hounds can get a productivity boost, too. Mr. Purdy says programs like Evernote let you tag or photograph items on the Web or from different documents for projects. "One of my efficiency rules," he adds, "is to capture ideas immediately and not let them get away."