Asking For (And Getting) A Salary Increase In Down Economic Times

Asking For (And Getting) A Salary Increase In Down Economic Times 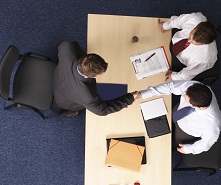 Should you ask for a raise during bad economic times? The answer is yes, but only if you deserve a raise and you've developed a carefully thought-through strategy. Even in bad times, asking for more money likely can tell you where you stand within your company and what the future might hold.

Abby is a CPA in Kansas City working for an auto parts company. Her work is demanding, and while she enjoys her job and her co-workers, her salary is about $12,000 less a year than what the men in her company make who have the same amount of experience and tenure and do similar work.

Abby is a single woman in her late 50s and doesn’t think she has many options if she loses her job.

Still, it rankles her to make less than the men in her company, especially since she’s the one everyone contacts because she knows her job better than anyone else.

Abby wants to avoid a gender discrimination suit, which she thinks would cost her the job, so she devised the following strategy:

1. She found out what her colleagues earn from a confidential report to company shareholders.

Rather than comparing herself to those salaries, which would raise the ire of her boss, she went to four internet sites to find out the salary range for CPAs with her level of responsibility and discovered that her salary was in the lower third for her geographic area.

The sites she used were Payscale.com, Salary.com, Glassdoor.com and GetRaised.com.

2. She determined the amount of money she’d saved the company in the past year from the reporting errors she found and rectified.

3. She uncovered ways to save the company state taxes that would have cost thousands of dollars.

4. She noted that all of her job reviews for the past five years were outstanding and complimented her on being a team player and a role model.

Abby scheduled a meeting with her boss and told him beforehand that it was about her salary. She tactfully provided her boss with the above information, and he said he’d consider it. Weeks passed and every time she asked about the salary increase, he said it was being considered, but Abby wasn't optimistic.

This is when Abby did something very few of us should, but it shows how an intransigent boss and company can switch gears quickly if need be.

Abby shared her salary concerns with several colleagues in the company and said that if nothing was done about it, she might have to file a gender discrimination case. She thought she would surely win.

A day later her boss met with her, apologized for the delay, said it took a long time to get such things approved and agreed to a $12,000 annual salary hike, effective immediately.

Of course, no one in an organization likes the threat of legal action. It often taints the accuser and, predictably, Abby could feel a difference in the way people related to her. Co-workers stopped inviting her to lunch.

Even some old friends who always asked her out for happy hour after work on Fridays stopped offering. And her evaluations now have a somewhat negative and nit-picky quality about them that makes Abby wonder if the company is looking for reasons to terminate her. Although she’s making more money, she’s decidedly less happy.

So how do you ask and, hopefully, receive a salary increase in tough economic times without upsetting your job security? Here are some tips you should consider:

1. Schedule a meeting with your boss and let him or her know the reason for the meeting to allow time to research your concerns.

2. Prepare a list of reasons for the raise with examples of your great work and numbers showing improved performance, money earned or saved, etc. Also, research your value in the market. Knowing what you’re worth gives you a great deal more power to negotiate an equitable increase.

3. Make the meeting conversational and not confrontational.

4. Point out the following if any apply: you took on new responsibilities (not more work because everyone is working more), you have responsibility for more employees, and/or you took on a significant leadership role.

5. Never threaten to leave the company if your request is denied. If the company is desperate and needs you badly, you may get the raise but your boss will probably never forgive you.

6. If your organization can’t reward you for the value you’ve added, feel free to start job hunting.

Peter Meyers with the Stand and Deliver Group in San Francisco adds that you also need to show your contribution to the culture of the organization through mentoring and teaching others new skills, and by enthusiastically taking on new assignments.

Knowing that you’re a team player and loyal to your boss and the company are both excellent qualities to point out in the conversation.

Cindy Perman correctly notes that if your organization has done well in the last quarter, even in a generally down economy, this may be a good time to discuss a raise since good news may improve organizational optimism and generosity.

Remember that one of the major reasons for large salary differentials can be explained by how well you negotiated your salary when you were first hired.

Find out the range, promote yourself and what you can do to help the company, and aim for the highest part of the pay range.

To be sure, the pay gap between men and women is currently 18% across all occupations, according to the U.S. Bureau of Labor Statistics, which means that women are paid for four days a week while working one day a week for free compared to men.

Unfortunately, salaries tend to rise for both groups at the same rate through their careers, which has the effect of maintaining the salary gap.

Yes, there are other ways to get compensated when times are tough. Jackie Fairs is a 36-year-old mother of two small boys, who works in an academic program at a prestigious Midwestern university.

She is on a national committee with people from other first-tier universities and earns a bit less than the average of the people on her committee, even though she has the same level of education and experience.

Instead of arguing for more money, Jackie asked her boss in the midst of a state salary freeze for permission to work part of each week at home. She also asked to bring her new baby to work the other days. Combined, those two changes saved her $1,500 a month in child care and a good deal of driving each day.

“My boss has gone to bat for me in the past and would like to raise my salary, but the university is in the midst of a salary freeze," she says. "Until the salary freeze is lifted in a year or two, this arrangement saves me money and helps make up for any disparity in my salary. I’ve made a point of being very visible on campus by networking and volunteering for committee work, and last year my department was named the outstanding non-academic support staff on campus and we all shared a nice financial award. I really love my job and feel very loyal to my boss and to the department. In the end, feeling appreciated and satisfied is worth much more to me than a small increase in salary.”

If you have a good case for a salary increase, come prepared to present concrete information about why you deserve it. Don’t be confrontational and try not to use legalistic arguments, such as age or gender discrimination, even though they may be true.

Instead, focus on proving your value to the organization. If you fail to get what you want, have a backup plan that includes a job search.

However, as Jackie Fairs points out, feeling high satisfaction with a job even if your salary is a bit less than you think you deserve may be worth much more than any salary increase can provide in positive mental health and long-term happiness.

Dr. Morley Glicken is a frequent contributor to CareerCast.com. His newest book, with Dr. Ben Robinson, Treating Worker Dissatisfaction During a Changing Economy (2013) is available through Elsevier Publishers (along with frequent blogs on workplace issues) and Amazon.com where his authors page can be found at: http://www.amazon.com/Morley-D.-Glicken/e/B002M3KCYM. He can be reached at: mglicken@msn.com.