Are You an Abrasive Boss?

Are You an Abrasive Boss? 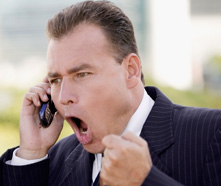 Most bosses think they do a pretty good job of keeping their subordinates happy. Don Bibeault has no such illusions. "I'm
not a jolly fellow who's fun to be with," says Mr. Bibeault, a former
turnaround specialist and CEO in Mill Valley, California. "I'm extremely dedicated and determined, and I don't have time to sugarcoat problems. If that's considered abrasive behavior, so be it."

What's it like working for such a no-nonsense executive? "Well, he yells a lot," says David Corcoran, who spent almost six years reporting to Mr. Bibeault in two different jobs. "Don doesn't believe in wasting time being politically correct. He'll say, 'This is my plan and that's it,' which can be very upsetting to some people. Fortunately, I found his style to be my cup of tea…most of the time."

Working for an abrasive boss can be a tough assignment. But what if
you're the executive everyone loves to hate? Your career may have
advanced nicely to this point due to your talent and expertise. But
unless you modify your harsh personality, it's unlikely that top
management will continue to reward you, say career advisers. The first
step is to recognize that you've got a problem.

"Few
managers, even those with hard-driving styles, see themselves as
abrasive," says Val Arnold, an organizational psychologist in
Minneapolis. "They work with blinders on, looking only at the
bottom-line results," he says, "while all around them, subordinates and
colleagues complain about and avoid them."

Even if they
recognize their faults, bosses don't become bosses by admitting to
character flaws. They might say to their best friend, "Gee, I know
everyone hates me because I'm tough," but they'd never concede that to
a colleague or subordinate.

To determine whether others may
perceive you as the Napoleon of your department, review the following
six abrasive managerial styles identified by Dr. Arnold. If one fits
your managerial style, suggestions follow on how you might improve your
behavior:

1. Field Marshals are classic authoritarian managers. They get things done, but are control freaks who tend to intimidate others. And when subordinates fail to carry out tasks exactly as requested, field marshals unfairly attack their lack of experience, talent or vision. Some clues to help you identify yourself as a field marshal, according to Dr. Arnold, include:

Suggestion: By working to improve your listening skills, and by sharing responsibilities more freely, you can elicit information from others before making demands.

2. Street Fighters, like Mr. Bibeault, are extremely competitive, with every interaction producing a clear winner and loser. They typically insist on having the last word and being perceived as always right, traits which damage their careers at companies where teamwork is valued above personal achievement.

Mr.
Bibeault says that being a street fighter is the only way he could be
effective as a turnaround specialist. His harsh style helped him revive
or liquidate 11 companies during a 25-year career, but led to
occasional death threats.

"When you tell a work force that
they've got 60 days to save the business or you'll close it down, at
first they don't believe it, then everyone takes a hit at you," says
Mr. Bibeault, who has run companies ranging from $60 million to $350
million in sales. "So, if instead of indirectly questioning the value
of a report, I say, 'this report stinks,' it tends to burst people's
balloons."

Nevertheless, Mr. Bibeault says he's been trying
to soften his brusque demeanor. "I'd like to think that I'm tough on
performance and kind on feelings, but there's only so much bending of
my natural instincts I can do before becoming a phony," he says.

Tips that you might be a street fighter include:

A variation of the street fighter, according to Dr. Arnold, is the person who says, "Of course I blow up easily, but I get over it right away and never hold a grudge." These people can't understand why others continue to be upset at them long after they've forgotten the incident.

Suggestion:
If you behave like a street fighter, try to determine who your real
enemies are and whether cooperating makes more sense. Otherwise,
"you're a heart attack waiting to happen," says Dr. Arnold.

3. Rebels like being the exception to the rule, and get away with it because they're very good at what they do. In fact, the number of rebellious bosses is on the rise, says Dr. Arnold, especially at small high-tech firms and other fast-growth organizations where individualism is prized. But rebels who flout authority are losing promotions at companies where leadership skills outweigh personal achievement.

To determine if you're a rebel, review the following rebellious traits:

Suggestion: If you have a different set of rules for yourself than for peers and subordinates, decide whether that's fair and in everyone's best interest.

4. Dr. Jekylls and Mr. Hydes have solid relationships and good interpersonal skills in one part of an organization, but have trouble with everyone else. One such operations manager in his mid-30s at a Midwest manufacturing company turned around a flagging division. "He was a hero to his subordinates, but he wouldn't cooperate with anyone above him, which didn't go over well," says Dr. Arnold.

A more typical case is the senior executive who zoomed up the ladder at a major U.S. company because he successfully completed every project he was given. "His bosses loved him," says Dr. Arnold, "but his peers and direct reports didn't trust him because he used people for his own personal gain."

Suggestion: Work on your relationships with colleagues other than those you're trying to impress. Respected bosses know how to motivate people all around them, while abrasive bosses ten to spend time with people who will boost their careers, or with those who are willing to put up with their personality.

5. Mr. Spocks (of Star Trek fame) are insensitive to their impact on others. "Deep inside, they have feelings for their subordinates, so they think they're
people-oriented," says Dr. Arnold. They're often surprised when they
learn that others see them as cold, analytical and insensitive.

Clues as to whether you behave like Mr. Spock include:

Suggestion: Once you realize how you come across, you can change simply by connecting your honest concern for others with your behavior.

6. Slippery Dicks are all smiles and agreeable, but do nothing to follow up or offer support when it's needed. These bosses often are politically savvy and fall into the "dress-for-success" group at the office, but are seen as lacking integrity for making promises they don't keep.

Suggestion: Stop being defensive and recognize your failings.

Of course, changing behavior doesn't come easily for some executives. "Bad bosses often are like Ebenezer Scrooge in ‘A Christmas Carol,' says Ms. Yager. "An awful lot of bad things have to happen to them before they
see the light."