The Age of the Office Culture

The Age of the Office Culture 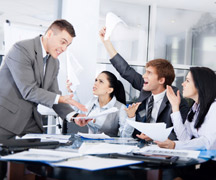 When interviewing for a new job these days, you should expect to be assessed just as much on how well you fit in with an organization’s culture as on your qualifications and experience. Of course, the shoe also is on the other foot: if you knew the "culture" of the organization, would you still want to work there?

To that end, here’s a handy (and hopefully humorous) guide to help you identify the different office cultures that exist in the working world. The goal is to highlight the warning signs you should watch for before you make a mistake and join the wrong employer. If it's too late, you have my sympathies - as well as a few tips on how to cope.

This is the office where no one actually seems to get any satisfaction from their jobs. They don’t make eye contact or talk about anything with happy connotations such as the sun, ice cream or balloon animals. Keep your head down and carry on populating that spreadsheet.

Signs of this culture: Cubicles; the Christmas party consists of a box of donuts; and the company website hasn’t been updated since 2009.

How to cope: You can start trying to break the monotony by decorating your cubicle with things that remind you of better times and places, such as personal photos or a lava lamp. Maybe try to inject some life into your co-workers by organizing fun office team-building days, or have a different person’s iPod on in the office as background music each day. If you’re really struggling to garner office support, how about a wacky hat Friday?

This is the office where mistakes are punished with a ruthlessness not seen since Attila and his friends fancied a trip to Western Europe. Unsurprisingly, every employee here develops a survival instinct of which Bear Grylls would be proud. Don’t expect to make too many (real) friends in this environment either. Just remember that while everyone in the office hates everyone else behind their backs, everyone outside of the office hates you all to your face.

Signs of this culture: Everyone lives off coffee and bagels (the sole reason they hire interns); the office is built on what used to be a children’s playground; and power trips are daily occurrences for everyone.

How to cope: Don’t be afraid to stand your ground – the last thing you want to do is give an inch because you know how the rest of that saying goes. Work hard, don’t take people at face value and do your best to stay out of the office politics.

This is the office you’d expect to find in the center of an affluent city providing top quality goods and services to customers of a certain ilk. Your colleagues will most likely be working just to make their spouse or parents happy. There’ll be no karaoke bars for your Christmas party; instead expect to be whisked off to your boss’ mansion. This would be great, if he didn’t make you serve his dinner guests.

Signs of this culture: Everyone is related to wealth (however distantly) and your colleagues still think it’s OK, even endearing, to refer to their parents as ‘mummy’ and ‘daddy’. Surprisingly little work takes place here, but the intern is wearing a more expensive outfit than you, which is a little depressing.

How to cope: Try not to let their pretentiousness get on your nerves. Instead, see it as an amusing quirk. If they patronize you, don’t rise to take the bait. After all, they’re the ones who aren’t living in the real world. There’s no point engaging in class warfare in the office.

This is the office culture where everything is cutting edge, and your colleagues are trendy as well as freakishly clever. It seems laid back but don’t let that fool you: there are mandatory team meetings at least four times a day when everyone will share their ideas for everyone else’s projects. If you haven’t designed and built a digital product or service by the time you’re 18, then you work in the onsite coffee bar.

Signs of this culture: There doesn’t seem to be any real structure or hierarchy; and the words ‘dude’ and ’awesome’ can be used in place of most words in the English language depending on your tone, emphasis and length of speech.

How to cope: Assuming you have a decent level of intelligence to have found yourself in this office in the first place, it's just a matter of making sure you’re good at what you do. As long as you’re brilliant at your job, who cares if you don’t go to office’s organic BBQ or high-five the boss every time you see him, although it may just be easier to capitulate.

This is the office where smiling is in the job description. Prepare to be labelled a grouch if you don’t get to work by walking on rainbows and singing to all the woodland creatures as you go. You also have to get on creepily well with your boss and other colleagues. Funky tie Fridays, office pets that are listed on the company website and made-up adjectives that sound ‘fun’ – happyfluffylicious, for example - are definite symptoms.

Signs of this culture: Sickly smiles all round, brightly coloured suits and everyone has a calendar featuring cute animals on the wall next to their desk.

How to Cope: Just smile and carry on. Easier said than done, but think of it like this – if you appear to be one of them, they might back off a bit. So cooperate with the overly happy colleagues as much as you can. After all, a smile never hurt anyone. You can be as grumpy as you like outside the office.

This is the office where most of us head to work each day. It’s the kind of place where all of the above cultures are combined into a giant mixing bowl of moderation. The average person off the street likes it here because it’s safe, inoffensive and well within their comfort zone. Not too boring, but not too free form. If you make too many mistakes you get fired, but otherwise everyone’s pretty happy.

Signs of this culture: If it doesn’t fit into any of the above categories, it's probably just an average office.

How to cope: Just be yourself - no special qualities (or quirks) are required.

Josh has written on a wide range of career and employment based topics. He wrote this piece on behalf of London recruitment agency Workfish, which specializes in helping companies and individuals find employment solutions in the PR and social media industries. Follow them at @WeAreWorkfish.