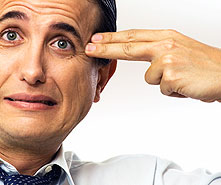 At the beginning of a job search, it not unusual to think that while you may be a little rusty, on a basic level you know how to impress employers and get a good job offer. But then, when you actually start to try doing it, you often get an unpleasant wake-up call. Employers don't acknowledge your resume submissions. Staffing firms don't return your calls. Recruiters act like you're damaged goods. When you come face-to-face with this job search reality, it's easy to feel like a failure.

The truth, however, is that you're not a failure. Sure, a few rejections are bound to bring up fears of never being employed again. But feelings like this are based on two huge misconceptions:

Both these views are widely help among job seekers, and both are completely wrong. In fact, neither one has been accurate for years. So when you buy into them, you throw yourself into a well of defeat that leaves you believing that you've done something wrong.

But it doesn't have to be this way. Instead, you can clear up your misconceptions and begin to learn the way today's job market really works. Do that, and you might even discover that what you used to call failure is actually now genuine success. But how can you alter a lifetime of thinking about how to get and keep a job? Start by understanding the way that employment has changed:

Correcting the Misconception of a Straight Line Career

You probably don't even think about it, but just assume that your career will unfold the same way it has for countless others – namely, that your progress in the workplace will move in a straight line. You'll begin at point A, and if you do well you'll move up to point B, then to point C, and so on. Ever onward and upward.

This kind of movement was traditionally referred to as a "career ladder." You've probably seen job search advice that references this ("Climb the Career Ladder," "Overtake Past Your Boss on the Career Ladder," etc.). The idea of the career ladder was simple: You either kept moving up the rungs or you fell off, got pushed off, or retired. You always knew where you stood.

Well, that career ladder is gone. Employers no longer help manage your career, guaranteeing you a path to the corner office if you do good work and prove your loyalty. Instead, this has been replaced by the zigzag career. What's the difference? The zigzag career still moves ever onward, but not always upward.

Instead of a ladder, picture this new approach as a "career jungle gym." Just like as a kid when you got to climb on the jungle gym during recess without the teacher bothering you, now there's no employer looking over your shoulder, telling you where to go. And while sometimes you move straight up on a jungle gym, you can also go from side-to-side, or even down in order to get where you're going. All you have to do is keep your eye on your goal. Today, the same is true with your career.

Correcting the Misconception of a Normal Job Market

In the past, job seekers faced "come as you are" job markets. In other words, the skill set you had in your last job was sufficient for finding a new job. Just update your resume, send it out to a bunch of employers and do a little networking, and soon enough you'd land a new gig that was as good as or better than the one you had before.

Today, however, the opposite is true. When you're unemployed, the skills that you needed for you last job won't be enough to get a new job. Given a choice between two equally qualified job seekers, one who's employed and the other who's not, survey after survey shows that 9 times out of 10, HR will go for the candidate with a job. Why? Because they're biased to believe that employed job seekers are more capable, and therefore more likely to be valuable to an organization.

So how do you get around this problem? Basically, you have to reinvent yourself, even while you're looking for a job. Update your skill set so you qualify for a more jobs. Enroll in an academic or training program, or take a course from your professional association, and include it on your resume. This shows you understand the importance of continuous improvement in today's workplace, and that you take responsibility for getting better without a company looking over your shoulder – or footing the bill. This will help set you apart in the job market, so you can restart your career.

Looking for a job today is definitely frustrating, and often discouraging. It does not, however, make you a failure. What's happening today is simply proof that the rules of the game have changed. If you change with them, you'll have what it takes to turn what used to be called failure into the modern definition of success.