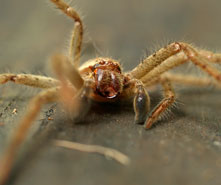 It’s that time of year when spiders and other creepy-crawly creatures seem to be everywhere, whether crawling around your home thanks to falling temperatures outdoors, or in the form of children’s costumes for Halloween.

For most of us, the thought of working with real-life critters everyday may leave you disgusted. But for others, there’s something fascinating enough about this eerie underworld to spend their careers working in close proximity with bugs of all sorts.

For instance, have you ever wondered how a medical examiner can determine someone’s time of death? Just minutes after death, insects begin to invade a person’s body and take-up residence. It’s the job of a Forensic Entomologist to study these insects and understand how they invade a corpse’s body and set-up shop, then to decipher the insect life cycles to determine the time and manner of death. These little insects can even offer up clues as to when and if a body part was moved after death and the types of injuries that may have occurred.

If you aren’t a herpetophobe, arachnophobe or just “creeped-out” by the mere mention of slithery critters, then maybe one of the following careers is right for you. Here are six of the top creepy-crawly careers you might consider launching (or at least dressing up as for Halloween):