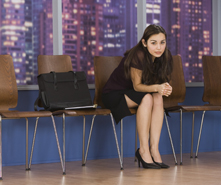 There's nothing like an attack of nerves to ruin a job interview. Even if you're confident that you're the best fit for the position, once your nerves hit, your chances of landing the job can crumble.

And if you think a great resume makes you a shoo-in, you're mistaken. You have to have the interview presentation to back up your experience. If you seem nervous when you're on the spot, the interviewer will assume that you don't handle stress well and that you aren't the best person for the job - even if you are.

I once participated in an interview contest at a university in which senior-level business students competed for the same hypothetical position. I did everything I could to knock the participants off guard and make them nervous, from asking socially awkward questions to asking ones that were just plain illegal. My goal was to make it harder than any interview they would encounter in the real world.

In the end, there was a clear difference between the participants who had prepared and those who hadn't. One applicant in particular had the perfect skill set for the position, but he got so worked up that he stuttered, became incoherent and repeatedly apologized for being nervous. I wanted to slap him and shout, "Get it together, man!"

Long story short, I ended up awarding the job to an applicant who had less to offer on paper but handled my disruptive approach impressively.

When it comes to keeping a cool head, preparation counts. There are a number of steps you can take beforehand to keep calm and ensure that things go smoothly:

When asked why he wore the same thing every day, Mark Zuckerberg explained that the ritual eliminated the need to decide what to wear. What he's doing is effectively reducing his level of decision fatigue. Humans are only able to make so many decisions in a day; the more we make, the less rational they become.

Make seemingly small decisions days before the actual interview. That means picking out what you'll wear, cleaning your shoes and even prepping your meals. That way, when the big day comes, you'll be ready to go.

Studies have also shown that this fatigue affects decision makers. According to the Proceedings of the National Academy of Science, parole judges lose their ability to examine applications as the day goes on, leading to more rejections. If possible, try to schedule an earlier interview. It will benefit both your performance and your interviewer's critical-thinking powers.

Find a friend, professor, mentor or previous employer, and ask him to participate in a mock interview. Interviews are a lot like sports: The more practice you put in, the better you'll perform.

Try to get in at least three mock interviews with different people to gather feedback. Record yourself, and listen to your responses to reveal areas that need improvement. If you want to get really serious about it, try recording your interview using your phone or a GoPro so you can capture your mannerisms and non-verbal cues as well.

Learn as much as you can about the company's history, competitive advantages and selling points - even your interviewer. The more you know, the better prepared you'll be to respond to questions and ask your own.

Don't forget to ask questions about the interviewer. Studies indicate that when people talk about themselves, they activate the part of the brain that's associated with value, pleasure and motivation.

Don't rush anything. Think about how much time you'll need for dressing, travel and psyching yourself up, then double it. You'll arrive feeling calm, not rushed.

If you're having trouble controlling your anxiety, embrace it and use it to your advantage.

One study suggests that being anxious and being calm are so radically different that it can be difficult to move from the former to the latter. Anxiety and excitement, however, are quite similar, despite their opposite effects on performance. If you're finding it difficult to calm down, it may be easier to switch to excitement.

Most importantly, remember that if you don't get the position, it's not the end of the world. There are a lot of great jobs out there, and if you're persistent, you'll find the right one for you.

Matthew Arrington is the executive director and co-founder of Forte Strong, the world’s first failure-to-launch program for men who struggle to leave their parents’ home or find it difficult to become independent.