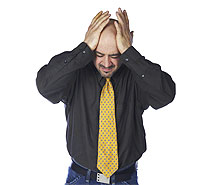 When you're sitting in your next job interview, try stopping for a moment and thinking about how similar choosing the right job is to relationships, and finding "the one" you want to marry. If you pick the right job, you could be living with your co-workers for years, motivating and mentoring them, pursuing common goals, celebrating successes and sharing failures. This sure sounds like marriage, doesn't it? Since a career choice could be with for years to come (and possibly last longer than your days of wedded bliss), it makes sense to avoid any job interview mistakes that could cost you the job offer of your dreams, or worse – drive you take a job that you'll hate.

Even though careers and marriages are both extremely important choices in a person's life, job seekers tend to spend much longer selecting a mate than on choosing the right job. Here are 5 job interview mistakes that job seekers frequently make, and that need to be avoided at all costs in order to find a satisfying career:

Anyone who understands sales knows that a potential buyer is more interested in how you can benefit them than how your product or service works. This is also true of a potential employer. While discussing your experience is useful, it isn't nearly as intriguing to an interviewer as how your background and skills will apply to their particular company.

Fortunately, this can be very helpful if you're trying to expand into a new career field. If you can show an employer how your key job skills will benefit the company, you may win a job over other candidates who have more relevant experience, but make the job interview mistake of not knowing how to sell themselves.

Would you marry someone you'd never met before? Not many people would choose to do that, yet many make the job interview mistake of accepting a job without even meeting their future boss. This is especially true for recent college grad job hunters. The thing to remember is that no one has more impact on your career than your immediate manager. Their feedback and attitude will have an effect on everything you do. Conversations they have with their boss (the one who has the real power to promote and fire you) may influence upper management's perception of you for years to come.

Before you accept a job, get to know your manager. Ask questions to determine if you have compatible work styles and philosophies. Determine if they are someone you could accept as a mentor. If they're don't meet the criteria, look for another job where the manager fits your idea of a good boss. There are many terrific supervisors searching for talented employees. You'll be making a huge job interview mistake if you accept anything less.

In the book You Can Negotiate Anything, author Herb Cohen talks about the power of precedent. He says the written or spoken word of a person in authority is perceived as being set in stone. The truth, however, is that most things in life are negotiable, including your salary. Most jobs have a salary range that's based part on experience and education, and part on what the job market says a person is worth.

If you get a job offer with a low-ball salary, you probably have some room to negotiate. It's better to ask for what you want than to make the job interview mistake of accepting a lousy salary and feeling exploited after several months on the job. If you don't at least ask for the salary you want, you'll likely wind up with a chip on your shoulder that grows every time you're stuck working overtime for crappy pay.

Many job seekers don't realize there are two needy parties in a job interview. You may be freaking out about making a good impression, but don't think for a second that your interviewer isn't freaking out, too. You need to find the right job, and they need to find the right candidate. A hiring mistake on a manager's record can be a major blemish that hurts their career.

Yet despite this, many job seekers make the job interview mistake of giving up all their power the moment they get offered a job. Your potential manager has invested in the belief that you are the right person for their job opening, and likely doesn't want to have to roll the dice with a second-choice candidate. Instead of worrying about what your potential employer will think ("Will Mr. Jones think I'm greedy if I ask for the company to pay for my parking spot?), use your new-found leverage to ask for what you want.

When you get offered a job but haven't accepted it yet, the balance of power between you and the employer is in your favor. If there's something you want, make a counter offer before you say "yes." Once you start work, it will take at least a year before you can ask for an increase in your perks again.

When you were a child, did you ever wake up in the middle of the night afraid there was a monster hiding under your bed? While these shadowy creatures were pretty scary, they always lost their power when exposed to the light. Few adults still worry about monsters under the bed, but many job seekers find themselves threatened by other, more insidious ones like:

This kind of negativity is far more deadly than bad dreams, because it lingers in your consciousness, capitalizing on every opportunity to frighten you into paralysis. It's no coincidence that people want to stay in bed and pull up the covers when the "I Am Worthless" monster comes to call. Thinking the worst would be bad enough, if it only affected your self esteem. But it has an even more far-reaching consequence. People who feel worthless and desperate are very poor interviewees. No matter how hard they try, they cannot disguise their negative feelings about themselves. When you think you'll make job interview mistakes, you do make job interview mistakes, becoming a victim of your own self-fulfilling prophecy.

If you need to banish a psychological dragon, expose it to the light of rational thought. The next time you're obsessing about how you're not good enough and you'll never get a job, confront this with some positive thinking. Will you ever really wind up sleeping under a bridge? Develop some alternatives for what you would do should you be evicted from your home. Could you stay with friends or relatives, or rent a room somewhere?

Once you have considered the true likelihood of your nightmare scenario, it will lose its power. And besides, avoiding these major job interview mistakes can go a long way toward helping you win a job before it could ever come to pass.