The 3 Goals of a Career Activist

The 3 Goals of a Career Activist 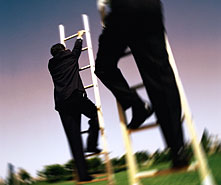 Face it: Today job security has joined the pay phone, carbon paper and typewriters in workplace history. The idea of guaranteed employment for life (or even more than a few years) isn't on most job seekers' radars. Even if an employer promises it, they can't deliver -- the global marketplace is just too dynamic, too unpredictable.

Does that mean there's no security in the workplace? Absolutely not. The kind of security you can get, however, is different from what used to be promised by companies. Today, if you want to feel secure at work – and who doesn't – you need "Career Security" instead. What's career security? Simply, it's the ability to stay employed in a job of your choice, regardless of the state of the economy.

As many of us have painfully learned in the current recession, job security is controlled by employers. It's provided at their discretion, and only when it serves their bottom line. Career security, on the other hand, is something you can create. It's a protective shield over your long-term employment, one that can't be damaged by any single company or earnings report. Achieving this level of stability requires taking two important steps:

A career activist is a person who throws off their passivity to take charge of their career. They don't wait around for their employer or boss to help them. They don't hunker down and try to hang on to a failing job, hoping that rewards and new opportunities will just appear out of nowhere. A career activist decides that they would rather be the master of their career than its victim, so they climb in the driver's seat and set its course.

You are a living organism, which means that you're either growing or you're dead. The same can be said for your career. If you don't improve your skill set and expand your network to improve the strength, reach and endurance of your career, you're going to find yourself in the throes of career cardiac arrest – also known as unemployment.

How do you keep your career in motion? By setting and working continuously toward 3 goals:

Your Achievement Goal is something you can accomplish in the next 6 - 12 months. Simply pick a goal you can achieve in your current job, such as a step-up in your performance, finishing a special project, solving a tough problem or resolving an issue that's hurting your work. This enables you to give your company a better return on its investment in you, and to give yourself a "career victory" that's both meaningful and makes you a better job candidate.

Your Advancement Goal is an objective you can reach in the next 3 - 5 years. Identify the next job you want or the next level of work you want to reach. This may be something you can get while staying with your current employer, or it may require that you move to another job, but it will always represent a major leap forward in your capabilities and contribution in the workplace. Your advancement goal should be something that makes you stretch beyond your current level of performance, but also be something you can realistically attain. If you think you can become the manager of your team, go for it, but don't plan on jumping from an entry-level job to the penthouse office on the top floor.

Your Development Goal is the bridge between your achievement goal and your advancement goal. It enables you to build on the success you accomplish in the near term by adding new skills and knowledge to help accomplish the longer term plans for your career. Your development goal kicks your career out of a stationary mode (clock-in, do what's expected of you, clock-out, repeat) and into to one in motion. It pushes you to keep building on the job skills you bring to the table, which will improve your appeal to future employers.

Of course, a career activist doesn't have crystal ball. They have no better insight than others about which path the economy will take. They are certain, however, of one thing: a stationary target is much easier to hit than a moving one. That's why they actively manage their careers and keep them moving forward all of the time.