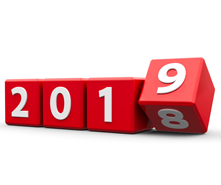 As 2018 draws to a close, the employment landscape that in 2012 began its climb back from recession depths reached a new milestone of just 3.7% unemployment. That's about half the number of unemployed 10 years ago when the recession began, and well below the high of 10 percent in October 2009.

CareerCast.com takes a look back at the year in jobs for 2018, and offers perspective for what to expect in 2019.

Professional and business services added the most new hires from Dec. 2017 through Nov. 2018, with 561,000 for a net gain of about 2.7% over the year prior. Within the sector, computer systems design and related services saw the most growth at 3.8% over 2017.

Education and health services experienced the next-most substantial hiring growth for the year in terms of pure numbers, adding about 473,000 new hires. In terms of percent growth, construction was No. 1 at 4.0% from 2018 — though this translated to 282,000 in total, as the industry still lags to return to pre-recession totals.

Although most sectors experienced growth in 2018, two dipped compared to 2017: Utilities and Information. Utilities hiring fell 0.3%, while Information dropped by 0.8%. Contributing factors that pre-date the recession continue a vice-grip like hold on job prospects for Information careers. Telecommunications was particularly hard hit, with employment plummeting by 26,600 jobs in 2018.

A contributing factor to the dire job landscape for telecommunications workers was the mass "pivot to video" outlets embraced in 2016 and 2017, motivated by traffic and conversion numbers provided by Facebook. Those figures proved misleading, if not outright false, and employers adjusted with layoffs.

As employment rises, employers must typically offer higher wages to attract and retain talent, a concept also tied into the presumptive strength of employers during times of low unemployment. However, an August 2018 Pew Research Center study found marginal wage growth commensurate with the steady hiring the U.S. has enjoyed over the past six years.

In fact, wages stagnated before employment factors tied to the recession or its recovery.

The average weekly earnings of employees in the highest-growth industries illustrate the slow increases. In construction, the nationwide average grew by about $33 per week. In professional and business services, it was $40. Education and health services average weekly salary only increased by $20 in 2018, although one factor in that is the ongoing growth of high-demand, low-pay jobs like Home Health Aid.

Still, as the job market has stabilized, employees have more prospective opportunities. The marketplace is competitive for hiring companies, so wage increases would seem the logical next phase of the current economy.