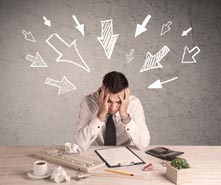 Our annual CareerCast Job Stress report is based on an evaluation of 11 stress factors, including hazards, deadlines, physical demands and life at risk. In our new examination of job stress, we took our research into the trenches and asked workers what they really feel about what’s causing their stress on the job.

Over 1,000 people took part in the survey, evaluating their own personal experiences with workplace stress. The resounding response confirms that most people are stressed while on the job.

A remarkable 82% of respondents said their jobs fall on the more stressful end. Stress levels were ranked on a 0-to-10 scale – with 0 denoting no stress, and 10 signifying constant stress. A score of 8 was the most popular overall at 24.6%, with a score of 7 receiving 23.2% of responses.

Deadlines were overwhelmingly the most popular contributing cause of workplace stress, according to survey respondents. More than 30% of respondents cited deadlines, with “Life of Another at Risk” stress factor coming in second at 17%.

The prevalence of this factor jibes with the high rate of Healthcare professionals who weighed in. Nearly 36% of those who filled out the survey work in this sector. Of the 371 Healthcare workers who responded, 101 scored an 8 for stress; 35 registered a 9; and 45 scored a 10.

Stress can be enough to force employees out of fields altogether, per the findings of the CareerCast.com survey. Almost 59% of those who responded said they would leave their profession if they could.

However, obtaining the same level of education prevalent among the majority of respondents would leave these same workers starting over from scratch.

The CareerCast.com audience’s response reflects trends that those who study workplace stress have also gleaned from their findings.

“Sickness absence costs the US economy $227B annually - but the truth is not everyone’s too ill to come into work,” says Ann Pryor, Marketing Manager of McGraw-Hill Education Publishing. “According to a study by Integra, 12% of employees called in sick due to job stress.”

The average American working a full-time job spends 47 hours per week at work. That pretty well covers the majority of our survey respondents; 84% said they are employed full-time.

If the same average American sleeps for seven hours per night – 49 hours for the week – then that means she or he is spending 40% of her or his waking time on the job.

That’s a long time to be under a lot of stress.

“The best way to deal with stress at work is to first acknowledge the stressful situation,” says Tiffani Murray, a Human Resources Manager in Atlanta. “Acting like it doesn't exist won't make your stress go away. If the issue is work related, try to figure out ways to remedy the problem.”

To that end, the most important thing is to mitigate the level of stress currently felt on the job.

Avoiding dwelling on stressors may be one way to alleviate workplace stress. For those unable to do so, simply voicing their concerns on the job to someone qualified to help might do the trick.

Murray explains, “With a demanding project find out if you can ease the burden by asking for additional resources to help with the project or by finding out where timelines can be relaxed to provide some relief,” she says. “Many employers also have what they call ‘employee assistance programs.’ These are free services to employees where they can utilize resources like counselors or support groups during stressful times.”

Understand if you feel stressed, you’re not alone. In fact, as the CareerCast.com survey indicates, you are very much in the majority.

CareerCast.com readers were asked their professional industry, level of education, employment status (full-time, part-time, freelance/contract, student), and to select the most stressful one of the 11 stress factors used to compile the CareerCast.com Jobs Rated reports on Most and Least Stressful Jobs.