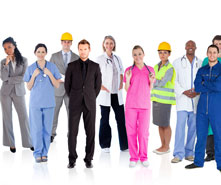 The annual CareerCast.com Jobs Rated report generates plenty of buzz and controversy each year it is published. It rates the best and worst jobs based on salary, environment, and outlook, along with 11 stress factors to determine which professions are the most and least desirable. This year, we created our first Jobs Rated survey, asking for readers' opinions on which jobs they think are the best and worst.

This was not a controlled survey, and opening up responses to individual reader interpretation generated dozens of different answers across subjects. Despite the lack of scientific results, the 369 total surveys are quite illuminating.

To wit, both the age and gender representation differ greatly from the overall American work force. Most of our respondents skewed younger, with almost 20 percent more men responding than women. 11.3 percent of respondents opted not to provide their gender, and 6.7 percent chose not to disclose age.

An overwhelming majority of respondents were between the ages of 18-to-35, within the generation commonly referred to as Millennials. This demographic has a diverse and contradictory stereotype presented in the media.

However, if the Jobs Rated survey is an accurate reflection, the 18-to-35 age group has realistic and sensible perspectives on the work force. Their collective idea of best jobs is defined by pay and growth potential, which combined for 44.8 percent of best job requirements among respondents who identified as 18-to-35.

While the spectrum of jobs nominated as best varied dramatically, general practice physician tied with blogger for the most votes with 17 voting for these jobs as the best. Interestingly, General Practice Physician also made the worst jobs list, following Telemarketer. Other professions voted among the worst include Teacher, Garbage Collector, and Assembly Line Worker.

While a Physician's pay is good and saving lives is rewarding to some, others felt that the stress and being responsible for the lives of others made physician an undesirable profession.

Not far beyond physician and blogger on the best jobs voting was CEO, Teacher, the 2016 Jobs Rated No. 1 career, Data Scientist, and Photographer. Respondents weren't pie-in-the-sky when it came to evaluating career options.

The same goes for suggested dream jobs. While a few unlikely nominations came our way - member of the Kardashian family and professional soccer player being two of the more improbable - CEO ranked as the top dream job, followed by Photographer.

As far as what readers believe constitutes a great job, pay is No. 1. High pay was cited as the top factor in determining best jobs with 50.6 percent responding. In a distant second was environment with 17.3 percent.

High pay correlates with the prevalence of respondents who saw CEO as their dream job. According to the Bureau of Labor Statistics, Chief Executives earn an annual median salary of $175,110. Other recurring dream jobs included Veterinarian and Oddsmaker, someone who calculates and sets betting odds. Take note, Las Vegas.

Deadlines were the most highly cited factor in determining worst jobs with 28 percent of votes, and low pay ranking second at 35 percent. Low growth potential and poor working conditions garnered 15 percent of respondents.

Most of the survey respondents identified as full-time employees - approximately 64 percent. 10.2 percent are part-timers, 3 percent work on a freelance or consultant basis and 12 percent identified as unemployed. Of the 12 percent currently without jobs, 80 percent (or 9 percent in total) listed "student" as their current occupation.