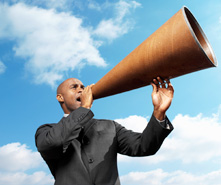 Informal research conducted over the course of three decades of career counseling suggests that over 87.6% of all job interviews begin with one of three queries:

The same research suggests that at this moment, 87.5% of all interviewees experience involuntarily-dilated pupils, parched mouth, sweaty palms and an incipient case of brain freeze. Yep, when the marbles are down, the stakes are high and the stress is surging, even the most talented people find it hard describe their strengths clearly, confidently and succinctly. As a country we have no trouble shouting "look at me!" in every imaginable media outlet, but when it's time to sing our own praises up close and personal – say, in a job interview – we suddenly go all shy.

It's a Drag to Brag

Why are we so bad at bragging? If you've done a candid self-assessment, tallied your skills, abilities, accomplishments and personal strengths, if you've prepared carefully for the interview and planed for possible questions, why is it so hard to hit the 'play' button and start promoting your achievements? When the spotlight's on you, why do you feel like you're on the verge of a Napoleon Dynamite imitation?

Psychologists can probably tell us what the problem is – fear of rejection, humiliation or outright scorn, perhaps. Maybe it's lack of basic ego strength, the belief that your most earnest expressions sound like worthless babble, or the fear that you're missing crucial signals about what the interviewer really wants. Or maybe it's simply the worry that an interview might spin out of control the moment the gate opens, and you'll fail to generate any rapport or chemistry whatsoever.

At least you're not alone. Everybody feels that same strange tug around the diaphragm when it's time to sell themselves. The higher the stakes – I really want this job! – the tighter the tug. But just because everyone suffers the same out-of-body experience when asked to extol their virtues ("Is this me saying this stuff?") doesn't mean that you can't master some basic techniques to quiet yourself down, cool your delivery and calmly blow prospective employers away.

To Be or Not to Be

Let's start with one general principle: When most people are asked about their strengths, they naturally start to answer with "I am" – as in "I am intelligent," or "I am a great project manager" or "I am able to leap tall buildings in a single bound." Don't answer questions with "I am."

One of the most important things NOT to say in a job interview is a form of the verb "to be" followed by some high-flown adjectives: "I am creative, bottom-line oriented, innovative, practical, kind, trustworthy, brave, clean, reverent and wholesome." This is unsupported self-praise – it's not true just because you say it is, and the interviewer knows it. Equally important, most of us feel squeamish uttering generalized self-praise, even if it's true. We're afraid it sounds arrogant, or lacks self-awareness.

Cut to the Chase

Remember that employers aren't interested in who you are, but what you can do. They're not buying abstract virtues; they crave stories about you in action, action that addresses their company's needs and wants.

The next principle is that you need to learn how to brag in the past tense. To put a finer point on it, employers want to know what you have already done. The fact that you've already accomplished something is evidence that you can do it again – for the next employer. Therefore, potential employers tend to be most impressed when you list your skills in past-tense action verbs. Consider these two sentences:

See the difference? Use those past-tense verbs! Wrote this. Directed that. Recruited and trained them. Conceived, planned, Implemented and trouble-shot that innovative initiative.

It further helps to use verbs that create a visual picture of you in action, as well as simply conveying meaning: "struck a balance among competing interests" instead of "mediated controversy," or "forged a powerful management team" rather than "hired skilled managers." If your personal vocabulary is short on action verbs, find a list online. And remember to have variety – don't fall into "Planned A, Planned B, Planned C," but instead find alternate forms of expression to keep things interesting.

In addition to all these "Do's," here is one very important "Don't": Don't use overly-fancy words.

Eschew erudite multi-syllabic confirmations of your innate intelligence and concomitant facility to translate definitive denotation into awe-inspiring obfuscation (annoying, isn't it?). The average college-educated worker naturally speaks at about an eighth-grade level of written expression. If you drop in a bunch of high-level words and phrases not used in everyday speech, the interviewer will likely think that your answers are rehearsed.

This is not good. Interviewers are constantly looking out for BS, and asking "is this conversation I'm having real?" Being prepared for an interview is good, but looking like you've rehearsed stock answers and impressive-sounding words is definitely bad. Anything that suggests your answers are not spontaneous makes it look like you're trying to trick the interviewer. This is a deal breaker for most prospective employers.

Once you've learned how to brag in the past tense, try a few specific techniques on for size. One comfortable way to sing your own praises is to let other people do it for you. This could be called the "other people tell me" approach, and it sounds like this:

Well, my staff tells me they like working for me more than any of their prior supervisors because, they say, I'm fair, listen to their point of view, and provide clear performance values and feedback.

The source of such praise can be informal, such as "My mommy tells me I'm adorable," or it can be official: "I was named Salesman of the Year in 2005, 2007 and 2008." The awkwardness of self-serving praise is avoided by this technique because you're not the author of the favorable judgment about you. You're simply passing on what other people have said – or would say if asked.