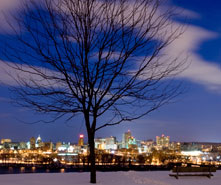 Want to know where the jobs are? These metro areas made up the 10 best cities to find a job in January: