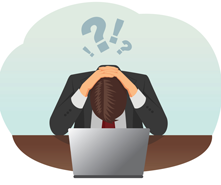 Life is filled with stressors – from worrying you’re going to lose your job because the company lost a big account to having a sick child at home. Much of the pressure we feel lies in the eight or so hours we spend at work. For the first time since CareerCast.com first debuted its annual Jobs Rated Most and Least Stressful Jobs report in 2009, we asked you – the reader – to sound off on the stress factors in your own career.

Our poll sought to determine the most stressful parts of your job. Do you have impossible deadlines? Is your job too unpredictable? Are you responsible for the safety of others?

The response was tremendous, and the results based on 834 respondents were illuminating. Most of the respondents (62 percent) rated their jobs as highly stressful, while just 11 percent felt the amount of stress on the job was low.

Any number of factors can contribute to an unpredictable workplace. Either the flow of responsibility changes from day-to-day with new tasks added or changed at random intervals, or expectations may change. For example, enlisted military, firefighters, and police officers -- three of the most stressful careers on our 2016 Job Stress report -- encounter more than one stress factor on a daily basis. Not only are their jobs unpredictable, but they also face personal danger, are responsible for the safety of others, and have a perilous working environment.

Running a close second is workplace environment, which includes interactions with bosses, co-workers and clients/customers. Public relations executives and event coordinators, which were also among the top 10 most stressful jobs of 2016, face considerable demands from their bosses and clients.

The information gleaned in the poll is noteworthy, especially when broken out by industry. Those in academia (40 percent), engineering (33 percent), and customer service (30 percent) rated unpredictability as their top stressor, while only 15 percent of those in transportation found unpredictability to be a stress factor at work.

Not surprisingly, ensuring the safety of others was the biggest stressor for transportation (41 percent) and healthcare workers (50 percent). Professional/business services workers rated deadlines at the most stressful part of their job (31 percent). Those in information technology said workplace environment was their biggest stressor (30 percent) and deadlines were the highest rated stress factor in the entertainment field (33 percent).

Perhaps the most intriguing result: responses skewed with a stress score on the high end. That's no surprise. What might come as a surprise, however, is that after a score of 7, 8, 9 or 10, the next most common stress score respondents chose was 1.

That result suggests professionals are often very stressed in their careers, or don't consider their jobs stressful at all. The lack of middle ground is fascinating.

While some people thrive on unpredictability and deadlines, if you are looking low-stress professions you might consider becoming a hair stylist, where the worst that can happen is a bad hair day or a broken blow dryer. Other low-stress jobs include medical records technician, jeweler and librarian, says CareerCast 2016 Job Stress report.

Methodology: The Job Stress poll was conducted online from visitors to CareerCast.com during January 2016 and sought to examine the opinions of workers on the major reasons for stress on the job. The poll tracked gender, age, employment status, and industry in seeking to determine job stress factors. It was an unscientific open access opinion poll in which 834 participants self-selected into participation.

Academic professionals accounted for a little more than 16 percent of all the surveys we received. Healthcare and Business/Professional Services checked in right behind Academia, with 16 percent and 15 percent of all replies coming respectively from these fields.

If you have a job-hunting tip you'd like to share with our readers, please click here. A selection of the best responses will be included in CareerCast's Best Job-Hunting advice article.